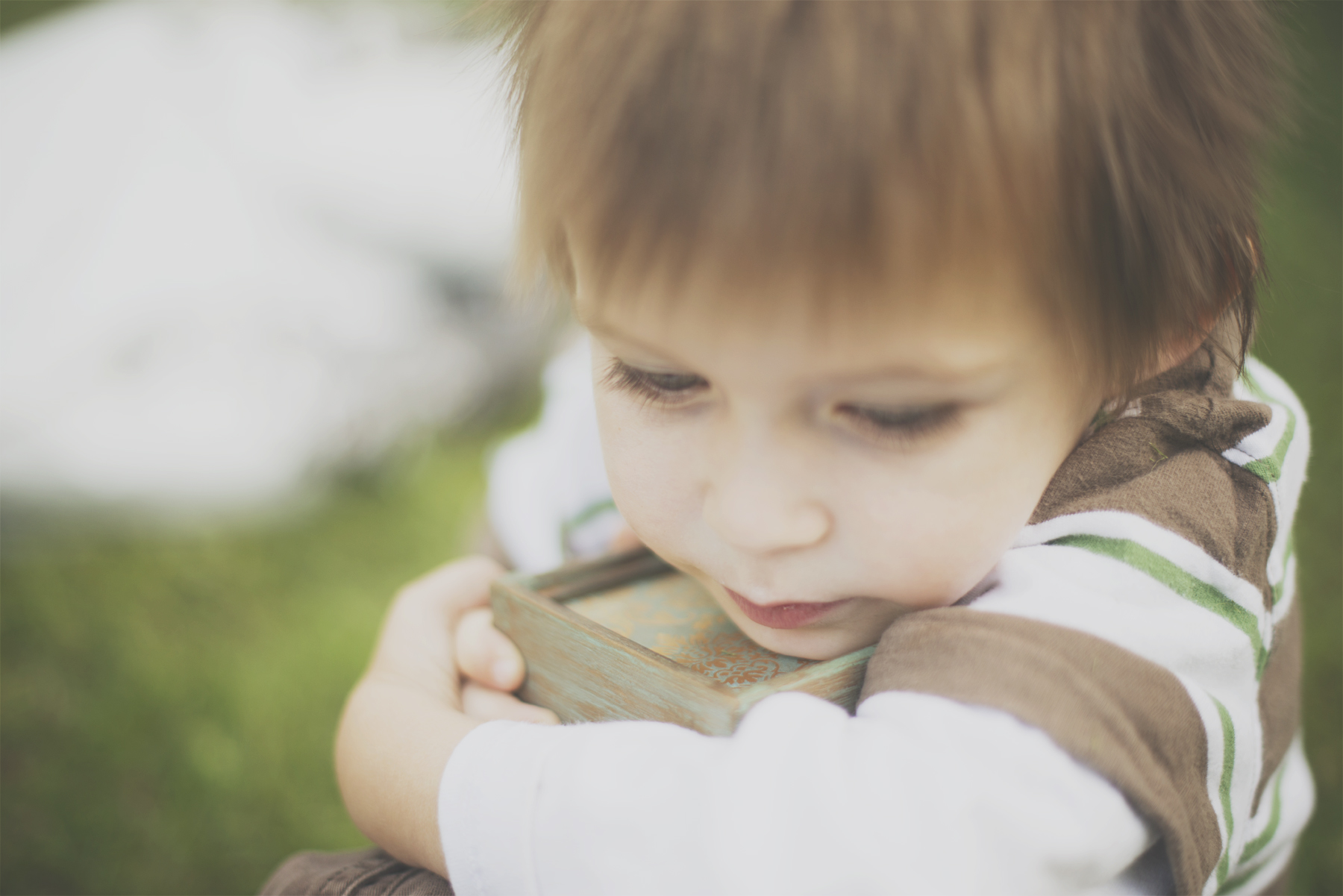 Izzy—Hugging the little wooden box we {bought last December for Anysia’s ashes} just
before opening it to spread the ashes out under her tree that we planted on Friday.
.
. .

The night before we planted Anysia’s tree, we told Izzy what we’d be doing the next day. He said, “After we plant the tree, can Anysia come home from the hosteebul… and she’ll see the tree?” Though we explained that she’s not here anymore, save her ashes which are merely what is left of her shell, he’s still too young yet to fully understand death. So he often thinks she’s still at the “hosteebul in heaven” as he calls it. A week or so ago, he said, “I wish Anysia could come home.” Last night, while getting tucked in by Mr. B, he went on and on about wishing Anysia was here and that he had a baby sister to play with so that he didn’t always have to play with his mom and dad. It’s heartbreaking to hear, but heart-warming as well.

Because he doesn’t yet understand it all, all the more the photos and moments I’ve hoped to visually preserve are so important to me. That’s why I took the camera out with us when we planted her tree two days ago. Just as we took our time in finding just the right tree, we took our time planting it last Friday… nine months to the day after she died, but her nine-month birthday, as well.

It was a sad, but sacred time. And sweet Izzy made it more wonderful than I could have ever hoped for such a solemn time to be. Where we felt the weight, he brought the lightness. I will never forget the moments we all spent together. Tears, laughter, labor and play. The dirt and clay under our fingernails, reminding us of the verse, “All go to one place. All are from the dust, and to dust all return.” {Ecclesiastes 3:20, ESV}

From that same chapter in Ecclesiastes…
.

A Time for Everything

For everything there is a season, and a time for every matter under heaven:

Anysia doesn’t just make me think of Anysia. Ansyia makes me think of everything in life… all that has broken or died, and all that is or will be restored. All that I mourn, and all that I celebrate. She’s forced me to look more intently at everything… inward and outward, past/present/future, personally and globally, here-and-now and eternity, the shape of a leaf and the state of my heart. Because of her, I ask deeper questions, and more of them, and I long for the answers more than ever. So these verses above take on so much more depth.

The photos from our time planting almost feel like a culmination of those words above and of all the moments surrounding Anysia over the past year and a half. I considered not having the camera there. It seemed that sacred to me. But looking at them over and over as I have the past couple of days, I’d regret not having them if I hadn’t taken the pictures… especially if I were given only a glimpse of what I could have had in these images.

I took them for our son. I share them with others because we never had a funeral for our daughter, and sharing them seems like a way of commemorating a life the way a funeral might have.

After we planted the tree, we all watered it together. Being a newly planted tree, ample watering the first several days is vital. On Saturday, the day after we planted, Izzy and Mr. B were at the kitchen table discussing whether or not they would need to go out and water the tree for the day. It looked like rain on and off all morning, so Mr. B said, “If it rains, we won’t have to go out and water the tree, because the rain will do it for us.”

{It did end up raining, too… an amazing brief-but-powerful downpour. As I watched the rain come down on Anysia’s tree from our living room window, I was moved… almost to tears. It felt like God was pouring down life-giving water and telling us this tree will thrive… like “I’ve got it covered. You just stand and watch it grow.” That is my prayer. That it will grow. And that we will stand.}