My First, and Though It’s Not a Goal I Previously Set, Maybe Not My Last… Who Knows!…

/ /
The first time one of my photos has appeared in Real Simple Magazine, that is.

When I took the below photo a year ago {during a Mother’s Day / blog start-up photo shoot for a friend}, I would never have dreamed that it would appear in any magazine, much less one that is among my favorites… or used to be, back when I used to buy and read magazines. But alas, it did appear in a magazine… or a cropped version of it, anyway.
. 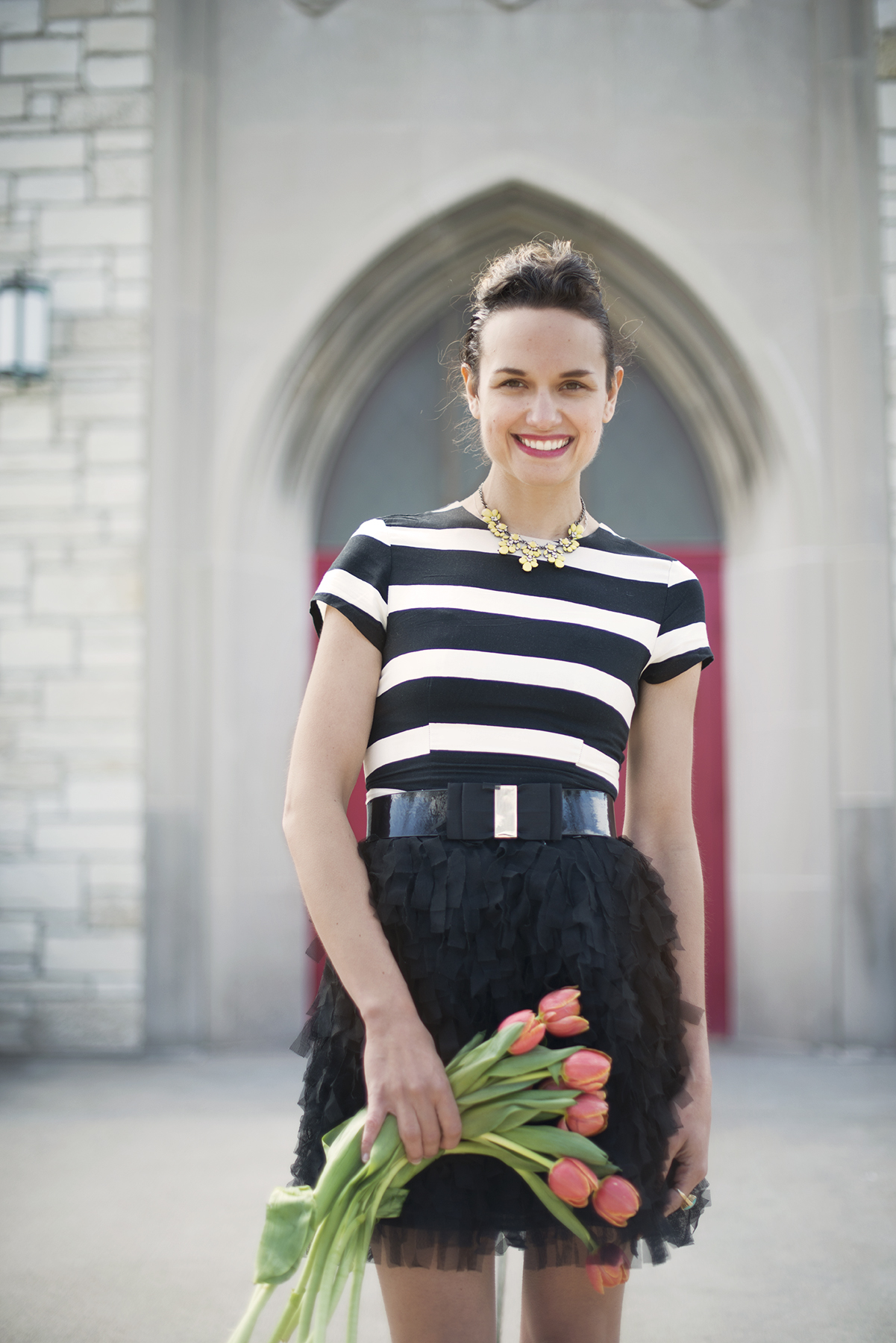 .
When I saw my friend last Friday, she told me the issue featuring her had come out. Because she mentioned it while we were walking around Whole Foods looking for snacks, my intent was to grab a copy for myself before we left. But wandering around Whole Foods together during our lunch break used to be a favorite pastime back when we used work together. Just like old times, we got some iced coffee and iced green tea, and I got lost in reliving the old days… so I completely forgot to pick up my copy of the magazine.

But even if I had remembered, it would have been for nothing. The June issue is already in stores, which means I missed my chance to get the May issue. I was so bummed to find that out during my trip to our local grocery store the next day.

No worries, though… my sweet husband checked it out from the library for me so that I could see it!
. 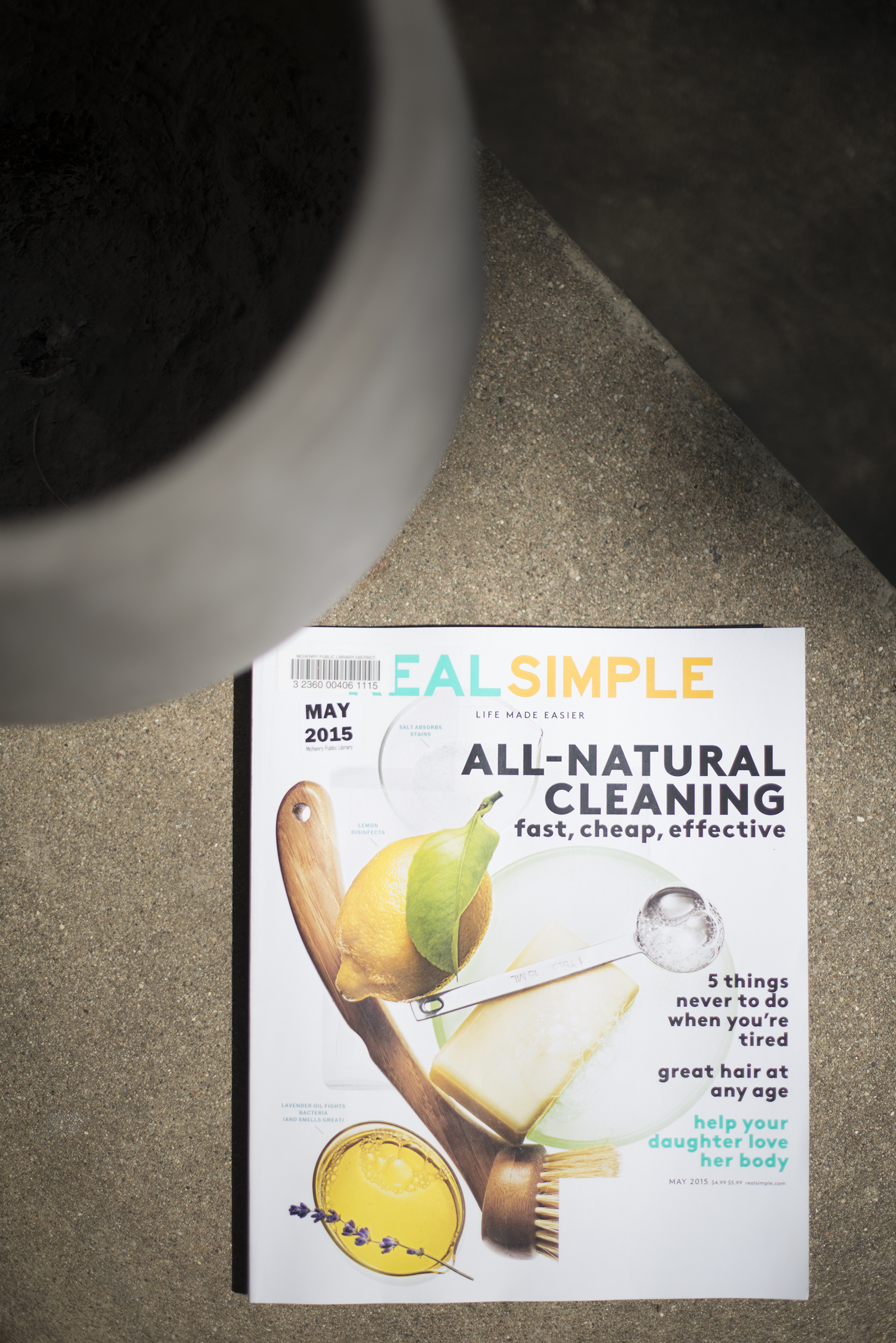 .
In case I never do get my hands on a copy to keep, I took some pictures…
. 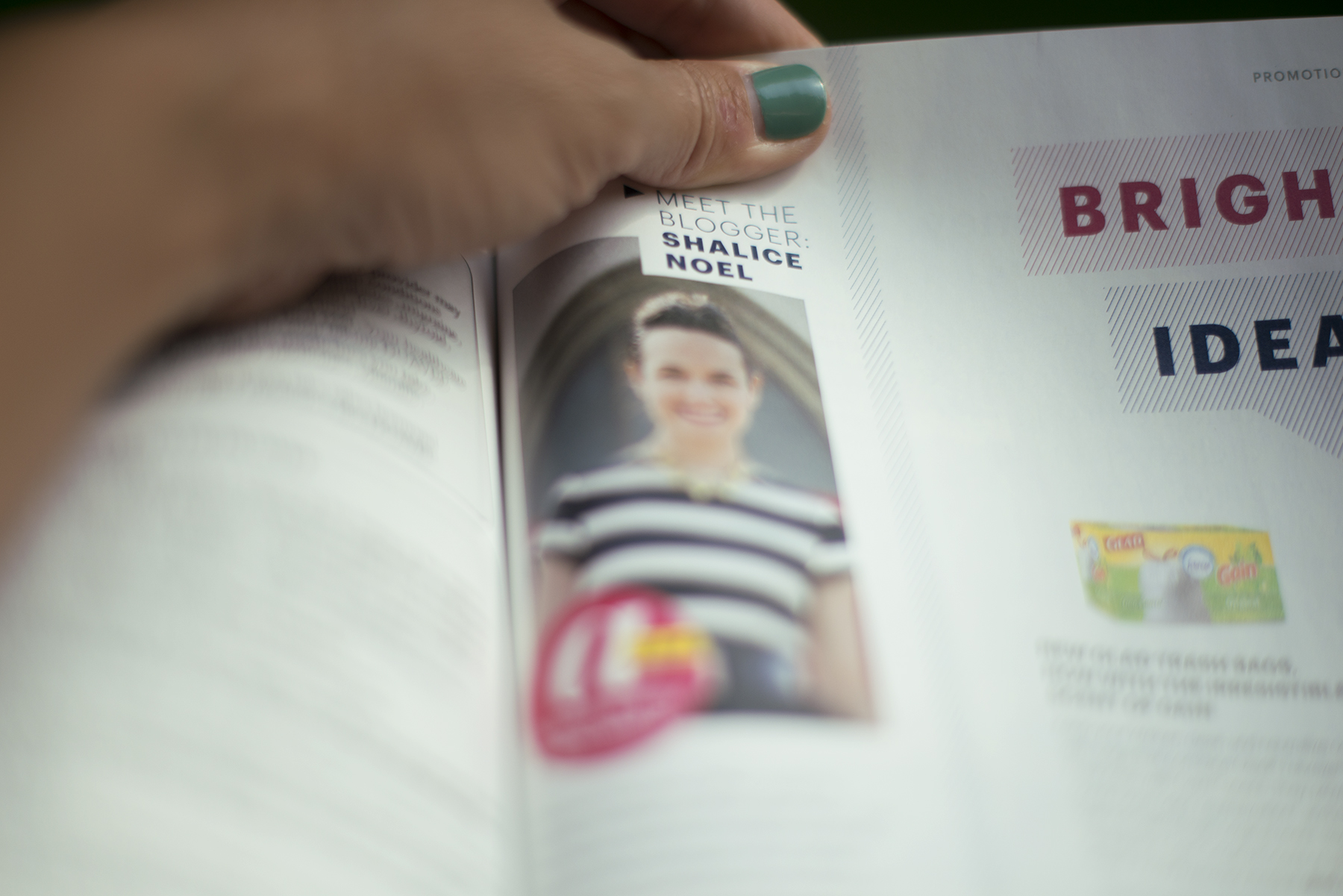 .
In all honesty, I am fully aware that Real Simple’s choice to use my photo in their issue had nothing to do with me, and everything to do with the girl who is in it. So, I can’t really get all that excited. Still, I never expected to see one of my images among their pages, so I’m going to take a few minutes to be giddy and then come back down to earth to give credit where credit is due…. which is to my friend, Shalice, who was featured as their A-list blogger of the month in May.
. 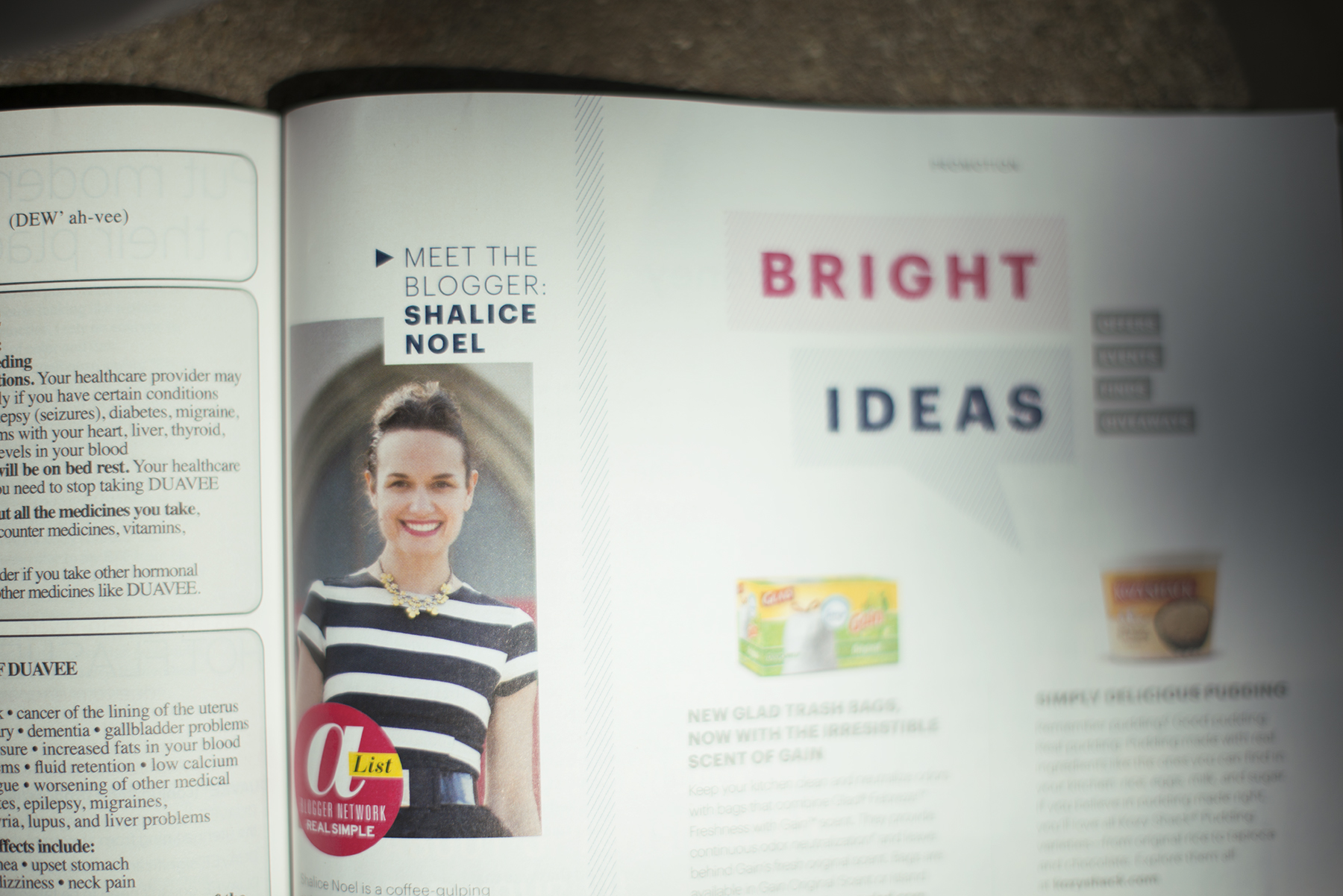 Why I cut off the blurb of text about her in my photo of the magazine page she’s featured on, I don’t know! Maybe because I was trying to get as close up to the feature photo of her as I could. No matter, though… I’ll just quote what they say about her here…
.

Shalice Noel is a coffee-gulping stylist, mother, and blogger who loves her family and the occasional thrift score. She manages a fun, albeit chaotic household with the help of her supportive husband. Among her passions are dark chocolate, kombucha, and all things fashion. From a young age, she created inspirational boards in her room using magazine cutouts of her favorite looks. She loves pairing unlikely pieces to add an unexpected edge to her outfits and to showcase her unique style. Follow her on Instagram and her blog for daily inspiration.”

.
I’m not even sure she could have foreseen that the photo would be in one of Real Simple’s issues when I took it a year ago. While she might be surprised by it today {maybe still pinching herself each time she’s featured somewhere}, I’m not at all surprised. Though she already had quite a large group of fans on her Instagram account when I shot this photo {and when she started her blog a year ago}, she was still a relatively unknown fashion blogger. But I knew she was going to make it big {which she did/is doing}, because she has always had that special something that gets others’ attention.

But to say I’m not surprised doesn’t mean I’m not super impressed every time she’s interviewed or featured. Sometimes, I almost have to pinch myself. For ten years, she’s been my friend… that girl I met in long, green straight-leg slacks and 3-inch wedge espadrille heels back on my first day of work at the publishing company where we met, whose style made me know we’d be instant friends… or at least that I wanted to be instant friends… and we were. {Funny, because remembering back to that day, it’s easy for me to see just why so many people follow along on her Instagram when they first discover her. I get it. I was there once, too… except, it was long before Instagram was even thought up, and it happened while I was sitting right there next to her in an office chair for a work meeting.}

Well… I digress. Anyway, some of our very favorites have featured or worked with her. There was Anthropologie, then Nordstrom, and now Real Simple… just to name a few. I only mention these three, because I distinctly remember back in the day, when we worked together, all three being a part of our fashion conversation. We both had {have} a thing for Anthro’s clothes, she was always telling me about Nordstrom {and sort of turned me into a fan/customer}, and we often looked through the pages of Real Simple together, as well as other magazines. So, it’s a bit surreal to see her now working with these companies. I wrote this to Shalice after she told me about the Anthropologie Mother’s Day interview that was posted on the Anthro blog…
.

I still remember back in the day when I met you at Crossway… how much we both loved Anthro and talked about it all the time. Who’d have thought that one day you’d be their favorite customer and “spokesperson”? Congrats on the feature. Sweet interview, mama.”

.
It’s a bit crazy to think back on that time, and then see how far she has come now. I’m so glad others have seen in her what so many of us saw in her early on… that she has what it takes to inspire and help others with their fashion conundrums, while making it all look so easy. She was the person who made me realize I can wear chunky jewelry and carry big slouchy purses… that I could pull it off just as much as anyone else… just as much as she could.

These days, I can’t wear half of what she wears. But that’s okay. Her fashion sense is still an inspiration and, if anything, those outfits inspire me to reach my goal weight so that I can pull off some of those looks again.

Anyway, I love the blurb about her in the magazine… because every word is so accurate. “Coffee-gulping” and “loves the occasional thrift score”… that was true of her when we met, too. And the mention of her passions for dark chocolate and all things fashion… yep!… that was her way back when, too… and two of the many reasons we were fast friends.

About that kombucha, though… never heard of it when we met, and I’m still not even sure what in the world it is today. Sounds exotic!! I guess I should Google it.

As for the “chaotic household” and her “supportive husband”, I can attest. I was just at her house on Friday {for the one-year blogiversary shoot she asked me to be a part of}, and it was just that… chaotic. How could it not be with four kids who are full of boundless energy? But I have to say… it’s the chaos that makes it so special.

While chaos might be evident in this family’s presence, it’s the evident love she has for each one of them that outshines it. She knows each one intimately and hones in on each child’s unique personality. And they all look up to her with the sweetest, roundest eyes. She might be on her way to being a fashion icon. But what I’ll always see her as first is a friend and a great mom.

Um… four kids. Busy as ever with her thriving business. Home-schooler. Excellent chef. Best boo-boo kisser around. Always stylin’. And lots of energy to boot. Sometimes I like to spend time with her just in the hopes that some of that multi-tasking ability will rub off on me. And it usually does… or at least inspires me to have as full a life.

Anyway, I wish I could share some photos from our shoot on Friday. Despite a broken camera, I was able to get some really lovely shots of her… in some gorgeous clothes, of course. There were balloons. And flowers. And her littlest one in tow. There was also balloon-escaping, and thus, some balloon-chasing. And lots of laughs. By the end of it all, we were rather exhausted. And after all that, we realized we didn’t even get all the shots we set out to get… so we’ll try it again in the next couple weeks.

She did hand over her iPhone to me for some of the photos… just regular fashion photos for her Instagram account, and not for the blogiversary. Being her photographer-for-a-day, I also took on iPhone photo duty {especially after not just one, but two of my camera batteries died}. Funny how lost I am with an iPhone camera compared to how I know my way around a big “fancy” DSLR. I was floundering at first, but then I started to get the hang of it. Here are a couple of my iPhone pics…
.

.
Even last year, I managed to figure out her iPhone long enough for one good Instagram shot… 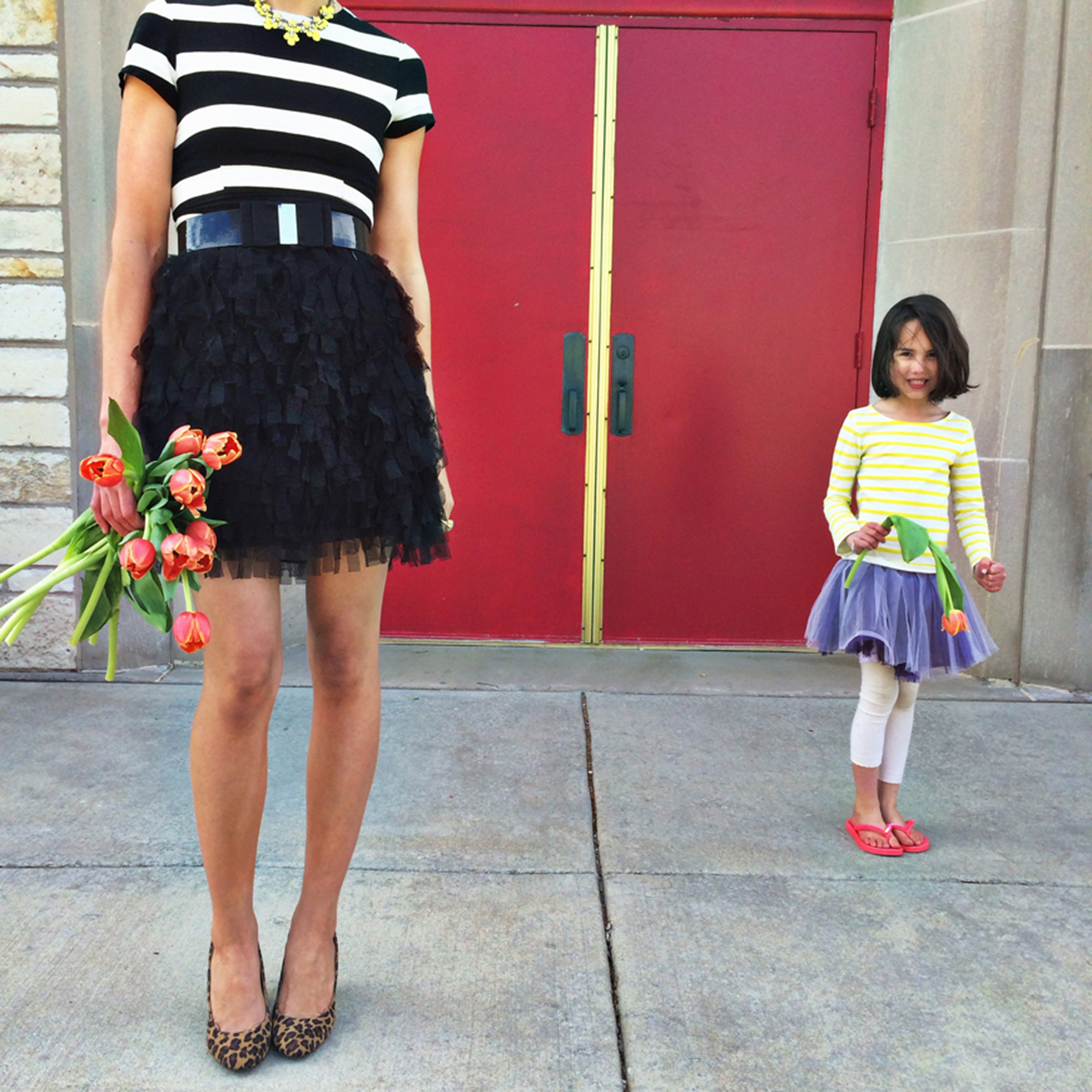 .
When it’s all said and done, though, I think I prefer using my Nikon.

There are a whole lot more non-phone photos we got for her blog‘s one-year anniversary. But I’ve got to keep those pics under wraps until her blogiversary is official.

Instead, I’m sharing the photos I took of her one year ago… for the start of her blog and Mother’s Day. I always intended to share these photos after I posted one sneak peek photo for Mother’s Day last year. I just never did get around to it, so I figure now would be the perfect time. I hoped to get to it on Mother’s Day this year, but I was sleeping all day last Sunday, having not slept the night before our flight home from Florida.

So, without more ado, here are those photos…
.

As for having a photograph I took in the pages of Real Simple… well, like my post title said, why not aim high to have one of my photos in that magazine? That would be a dream. Just the way Shalice chased her dreams, why shouldn’t I? That would be so awesome. Before I even became a photographer, I used to look at the pages of that magazine and admire the photography. I would even sometimes rip out pages that had beautiful photos and inspiring quotes and hang them on my wall. Real Simple doesn’t know me from Adam… it’s my friend they heard of and asked to have a photo for. Maybe some day they’ll know me too, and I’ll have a photo in there featuring Jorjah-B… not just by Jorjah-B. Even if not, the work in their magazine is something I aspire to. So I’m delighted to see my photo on page 137 of the May issue just the same.

← From August to May
The Sign I Wish I Could Wear →

19 thoughts on “My First, and Though It’s Not a Goal I Previously Set, Maybe Not My Last… Who Knows!…”