From August to May 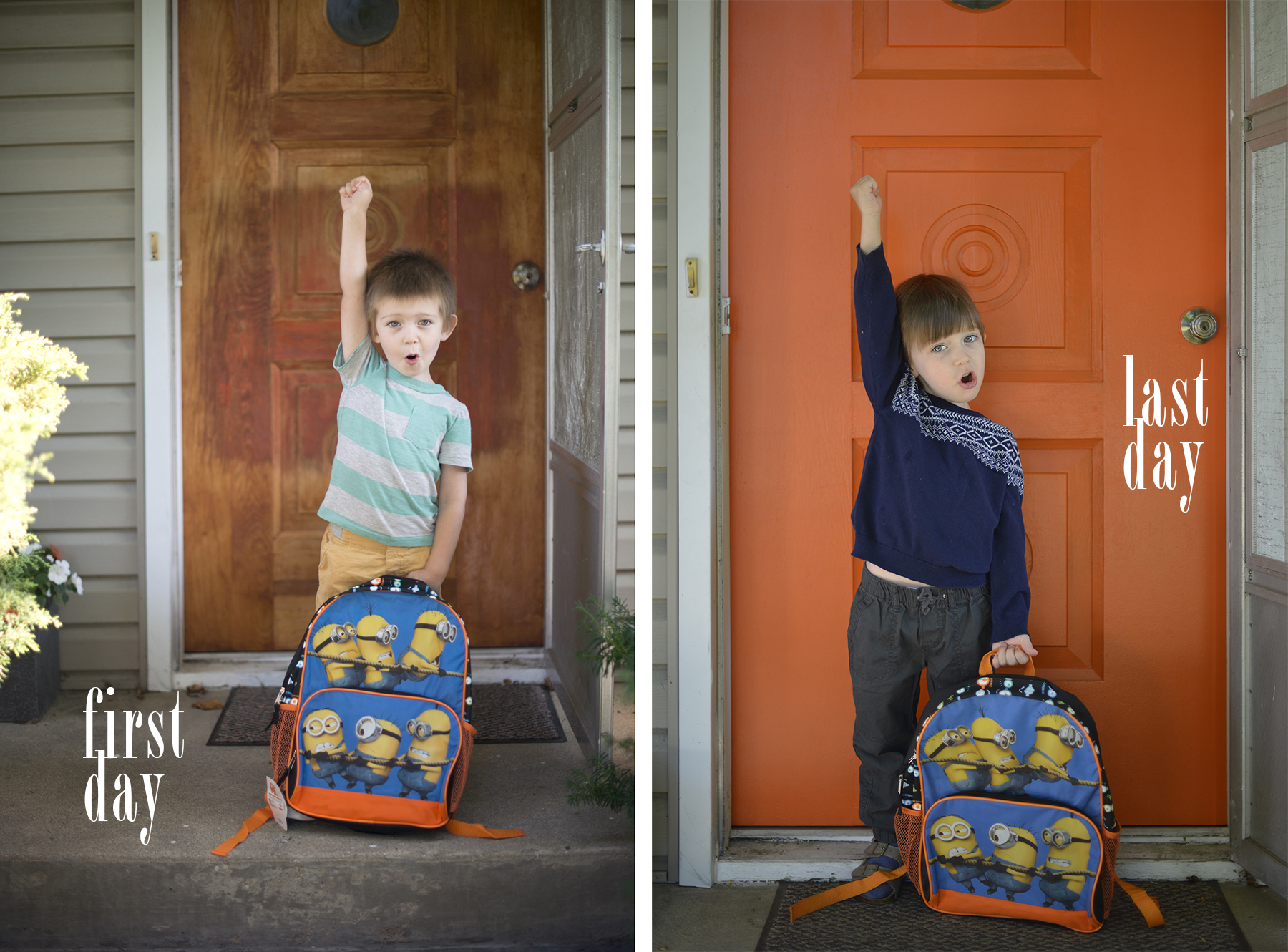 / /
It’s official. Izzy is a learned {little} man. He now has one full year of schooling under his belt, and I have two thick binders full of the cutest little art projects I’ve ever seen. {Some day, I’ll do a whole post on just those, because they’re almost comical. Three-year-olds put construction-paper turtle legs in the darnedest places… it’s those kind of sweet little deviations from the craft-time instructions that make such creations the gems that they are.}

I’m amazed at how much he’s changed in just the course of ten months. I mean, I guess it shouldn’t surprise me… that’s almost a whole year. But it just doesn’t seem like it was that long ago that I took that top left photo… back on August 20th. Today was his last day. While the first photo from his first day turned out totally unexpectedly {and pure gold}, I intentionally had him pose the same way this time around… to mimic, on his last day, the excitement about the first day of school that I captured months ago. The excitement for both days was sincere, whether posed in the photo or not. Excitement about starting school. Excitement for summer to arrive.

When we were in Florida last week, Mr. B. and I had a conversation with his dad about how much time seems to go by faster and faster the older we get and how we all wonder why that is. I’m sure I’ll never know why. His dad, who’s approaching the end of eight decades {with just one year to go as of Friday on his birthday}, talked about how he thought time would slow down once he retired, yet it seems to move even faster. I believe it, knowing how fast the days fly by for me at about half his age. But I still remember back to days when I was closer to Izzy’s age. A school year seemed like a lifetime. So I’m guessing it has for Izzy, too. For me? I swear it was just yesterday{ish} that I bought him that Minion backpack and shuffled him off to school for the first time.

That was Autumn, and the leaves had already begun to fall. Now we’re in the thick of Spring, and they’ve all just poked out of their branches for the year, not even close to going anywhere any time soon. Funny, too, because that first day was more like a summer day, temperature-wise…. a flip-flop with today, which felt more like a cool Fall day.

Back then, our front door was transitioning between seasons too… having just shed its red coat, ready to don the new orange one.

But nothing has changed more than that face. How it has matured. And he’s grown up in height, too… although, it’s difficult to tell just how much, because I neglected to position him in the same place in front of the door as where he was in the first photo.

What hasn’t changed is his disposition. He’s still a sweetie. Lately, we’ve had to trudge through a tough stage where he seemed to tap into {or give into} his grouchy moods. But we’ve been working on giving him the tools he needs to navigate and cope with those emotions. How strange it’s been, because as I do so, I realize that I myself need to heed my own advice as I catch myself giving it to him. How easy some things are to tell a child concerning what’s right, but difficult to live and practice in our own lives. This is not the first time I’ve experienced that revelation. And it probably won’t be the last.

Anyway, he’s learned so much about himself and others throughout this first year of preschool. In ways, it has made him retreat into a shell he never even had prior to attending school. But he’s figuring it all out, and I’m confident he’ll get there… to a comfortable place of being around others and trusting that they want to get to know him. I’m excited for next year and hope to see that come to fruition.

I wanted to spend this day just like we spent his first day of school… some photos at home before we left, a few at school, and ice cream {with more photos, of course} after school to congratulate and say Well done! {On special days, we eat dessert first!… Well, just having dessert at all is a treat for us, but when it’s an I’m-proud-of-you kind of day, that treat gets elevated above the main meal.}

So, here are the rest of the photos from last August…

And here are the rest from today…

On the walk from the parking lot to the school doors that first day, he found a leaf and picked it up, then handed it to me saying “I found this for you, Mama.” On the way out today, it was a dandelion. Found objects were telling of the time of year, while his temperature-appropriate clothes were not.

Last August, he brought home his first art project… a smiley sun. Today, it was a flip-flop made of paper and string to celebrate the Summer break ahead. {I forgot to take a picture of it.} The first time he brought that backpack to school, it was shiny and new. Now it’s just about worn through on the bottom. Ten months ago, he looked three. Now he looks four {and *sniffle, sniffle* that baby face has started to fade}. That first day he had blue/red ice cream {flavor unknown}. Today’s flavor was dark chocolate {yep… he likes dark chocolate like his mama}. At the start of the school year, we had lunch and a nap at home after our ice cream. On this last day, after ice cream, we went to Culver’s to share a celebratory burger and fries.

Last Fall, I was so proud of him.

← Missing You, Florida, and Your Lovely Face.
My First, and Though It’s Not a Goal I Previously Set, Maybe Not My Last… Who Knows!… →

10 thoughts on “From August to May”