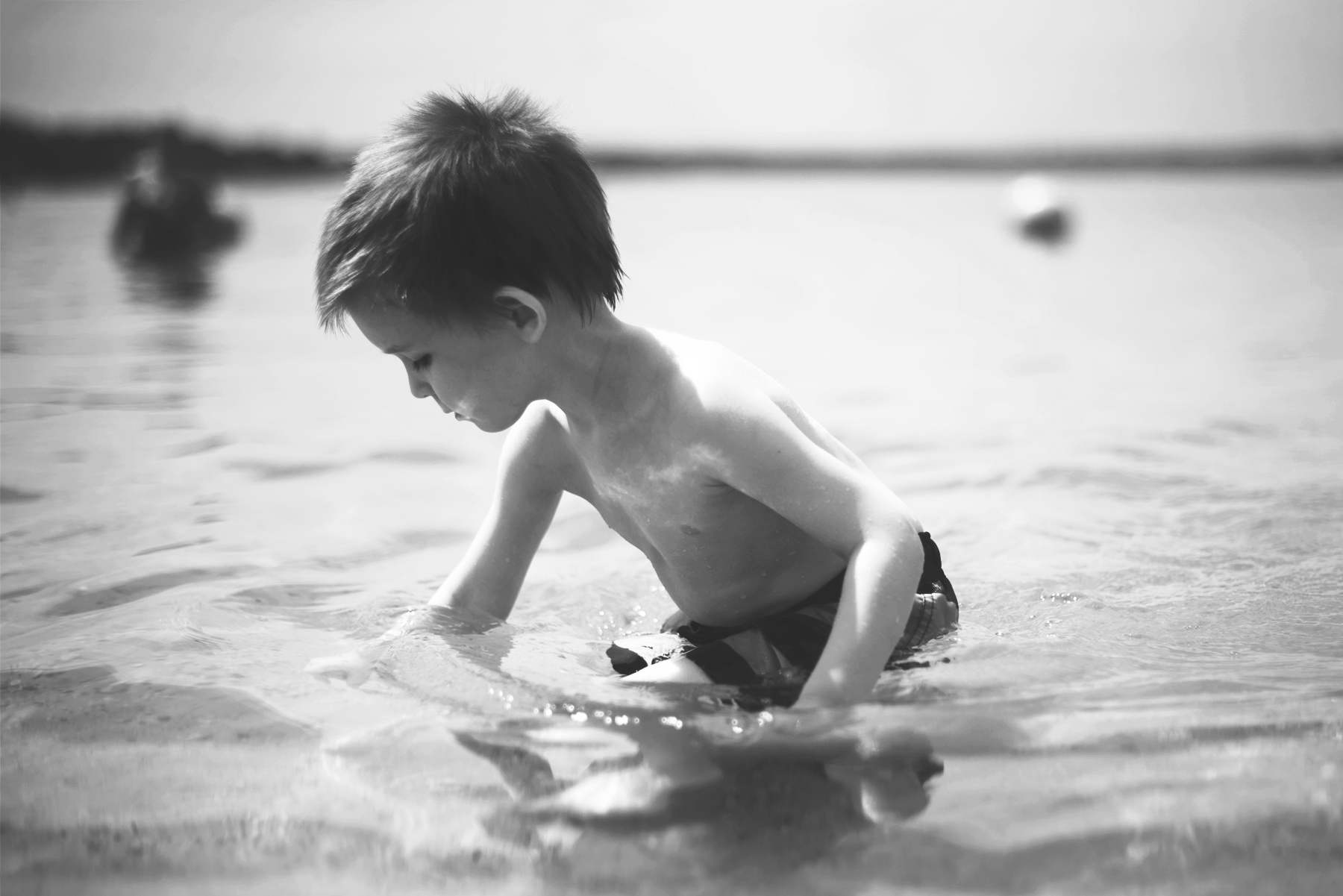 Izzy—At the beach, looking for rocks while, unknowingly, a canvas of sparkling light.
.
. .

As was the case during our time at the county fair, I got several photos of Izzy at the beach last week. This was one of my favorites. I ought not to have creeped thigh-deep into the water to get the shot with such a pricey device strapped around my neck. But I couldn’t resist. And it was worth the risk… well, I guess that’s easy to say after not having damaged my camera, and probably less easy to say had it gotten wet. But I didn’t get it wet. So that’s that.

I didn’t get any Izzy-isms into my last Project52 post. To be honest, he says so much that cracks us up or makes us smile these days that I can’t really keep up with writing them down. So, it’s not that there was a lack of material… just a lack of effort to document them. This week, I’m using just the three from this morning…

{We were playing with stickers and he kept asking for me to help with peeling them off so he could put them on the surface of the coffee table. I was holding a sheet full of rainbow and stars, and he kept coming back for more of those… he’s a fan of the rainbow shape and was making some fun formations out of them with them all together.}

Izzy: {pointing at another rainbow and grunting… his regressive way of communicating with me when he wants something even though he has full capability of asking with words *sigh*}
Me: Oh, you want one of those guys now?
Izzy: Those aren’t guys! Those are rainbows!

Funny how much they learn in the beginning and take everything literally. I guess they’re slower to pick up on slang than correct use of words… and that’s a good thing!

{Sitting on my while we ate together out of a large bag of sour cream and cheddar potato chips… yum! He hit the bag and was worried it might have hit me in the eye, ’cause we’ve had talks about that lately… how he has to be careful what he does with is hands and feet, especially around someone’s face. You know… it’s all fun and games until an eye gets poked out.}

Me: {After he punched the bag} Hey, don’t do that!
Izzy: Did I make you lost an eye?
Me: Nope. Is that what you wanted to happen?
Izzy: No… I don’t want you to be a one-eyed monster!

Hmmmm… I guess he’s okay with a two-eyed monster for a mama… just not a one-eyed.

{Just after running down the hall from his room toward me in the office first thing in the morning… one of my favorite sounds ever… and stopping in the office doorway when finding me.}

There’s not much unusual or funny or surprising about what he said, but it was sweet as could be, and it’s not necessarily the way every morning plays out. He has lately been a grumpy guss in the mornings. So, it meant the world to me… especially given the struggle we’ve had with him lately in the not being mean or rude department. Not to paint a picture of a terror child, because he’s as sweet a boy as ever. But I think he’s experimenting with the emotions and acts of shunning and such. Likely, there’s nothing much meant by it, and it’s all just a way of working out all the new thought processes he experiences… all the new ways he’s discovered to interact with people. But it’s still a bit sad when your son tells you to leave the room because he prefers the other parent {which both Mr. B and I have been experiences as of late}. He’s three. Just barely. So I try not to take it personally. Still, it’s nice to have this tender, sweet side of him resurfacing in the midst of this stage… oh, how I hope it’s only a stage.

He’s headed for preschool next week. A year earlier than we had intended on starting him. But we can tell he needs and truly covets the time with other kids, and we don’t think it could hurt his already {I think} healthy social skills. And to be honest, it’s just as much about me and the mental break I need. I will miss him {though it’s only a couple of hours, a couple of days a week}. And I’m not in any way tired of him… quite the opposite. But I think that for the sake of my grief that never really gets to be done in solitude, this will be a good thing for me too. I may even use the time to work out or run, and in the process, get out some of the emotional angst that builds up in grief when not allowed to be shed. Sometimes, I try to do both at the same time… be his mom and grieve too. Sometimes it works. But usually, it just results in each being done poorly… not well. So I look forward to this new season. Only time will tell whether it’s a good move. I miss him just thinking about it. But I have such joy in thinking about the fun and growth he will experience!

Summer is flying by. School and Autumn are around the corner. My counseling is about to be scaled way back for financial reasons {wouldn’t be able to manage it in addition to the new cost of preschool}. And there are only twenty more weeks to post for this project {wow, that went fast!}. That about wraps up.