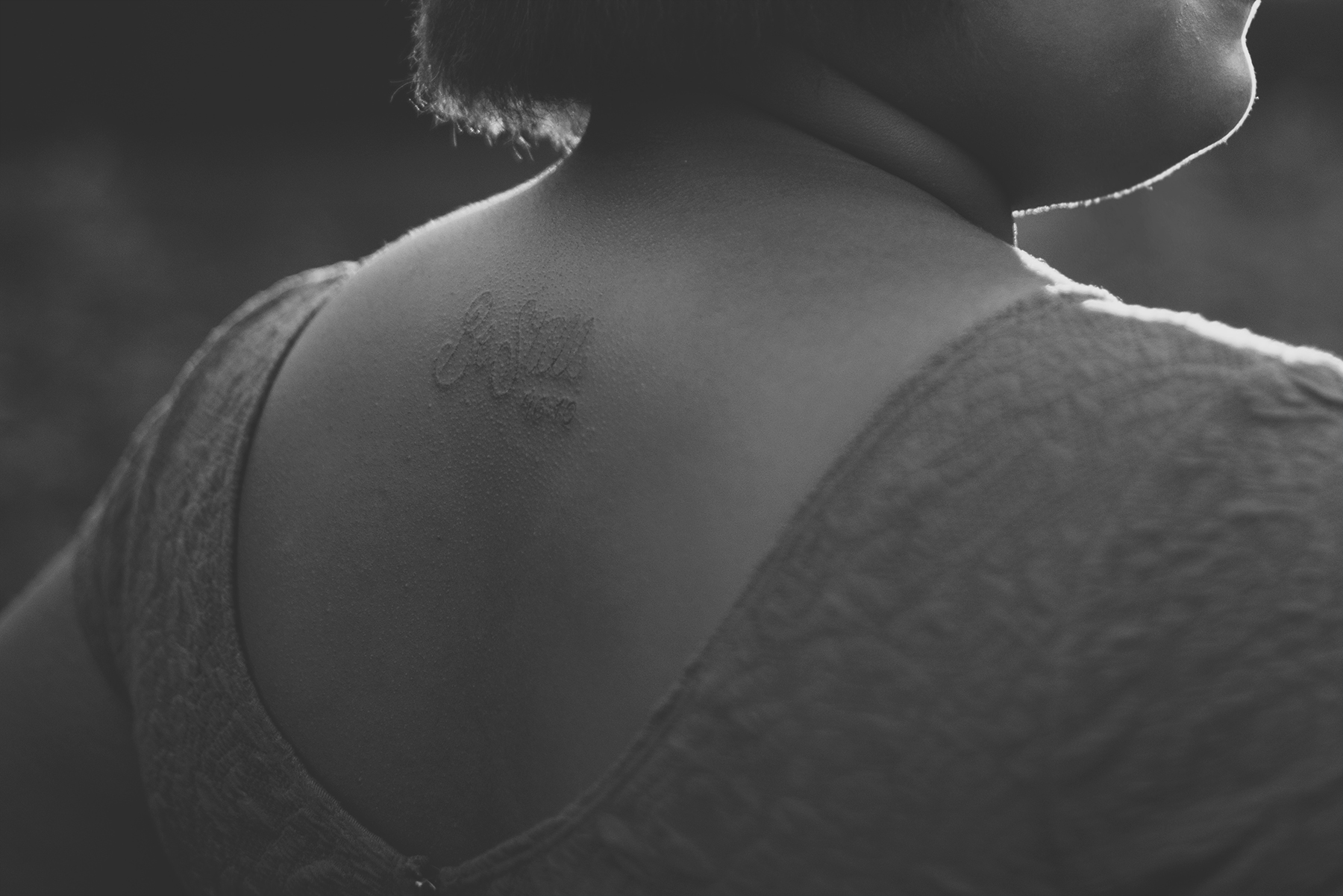 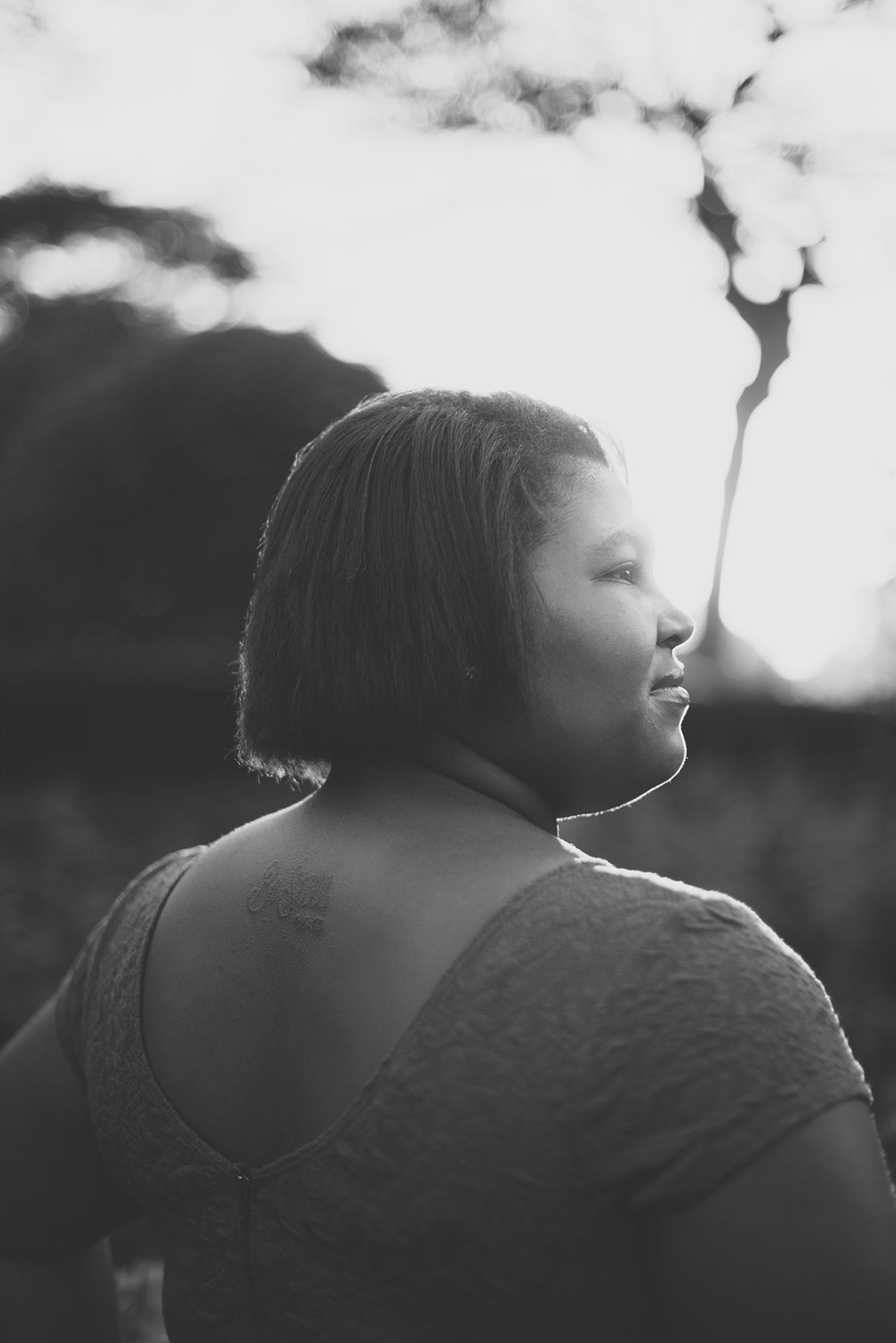 / /
I’m sometimes amazed {maybe not as often as I should be} at how God works and gives us His word in His timing, at times he sees fit for us. Sometimes, it’s in a sermon I hear… where it seems as though every word out of the speaker’s mouth was breathed for me… or rather to guide, remind or comfort {or any combination of the three} me in what I am going through. But other times, His word comes in the most unexpected places.

Tonight, it was in a tattoo. The tattoo simply said, “Be Still” {with the numbers 46:10 underneath, as it’s taken from Psalm 46:10}. Weird, huh? Not the tattoo… I actually love the tattoo, and I’m not even a tattoo person. What I meant is that the way in which God got me to notice or remember that verse right now is weird. Good weird.

This tattoo… these words… is a very special tattoo with very meaningful words to a young lady who wears them everywhere she goes. I’m not even sure why they mean so much to her, but it can’t be hard to imagine how, as the verse they are from in Psalms is a very comforting verse and has come to help many who’ve read the words. Personally, I find that the entire verse is comforting. Be still and know that I am God. Of course, that would be a bit much for one tattoo, especially one like hers. But although the verse in its entirety is one I cling to often, it’s the first four words, be still and know, that mean so much to me.

I brought those words with me to the hospital when I gave birth to Anysia… quite literally. They were written with permanent ink onto a rock that someone gave me… a very special someone who I’ve met only once. She gave me that rock when we met over tea at Panera one night. I asked my counselor at church to connect me with her, knowing that she had lost a little boy who had Trisomy 18 just a couple of hours after he was born. I was pregnant, she was ten years past her loss, while still living in the middle of it in ways, I’m sure… even ten years out. But I could also tell she had healed. And she even mentioned how meeting with me to talk about my Anysia was sort of a healing experience in her loss.

Anyway, she brought that rock with her, and she told me that it had been given to her when she went to the hospital to have her son. Someone had given it to her, just as she gave it to me. She held on to it for ten years. And ten years later, she felt compelled to bring it along to our meeting and give it to me. She gave me the most precious gift, and I carried it with me to the one place I ever knew my daughter face-to-face.

So, you see, those are very special words to me. My friend who came to take pictures of our daughter in the hospital was thoughtful enough to take a picture of that rock sitting there next to my bed. 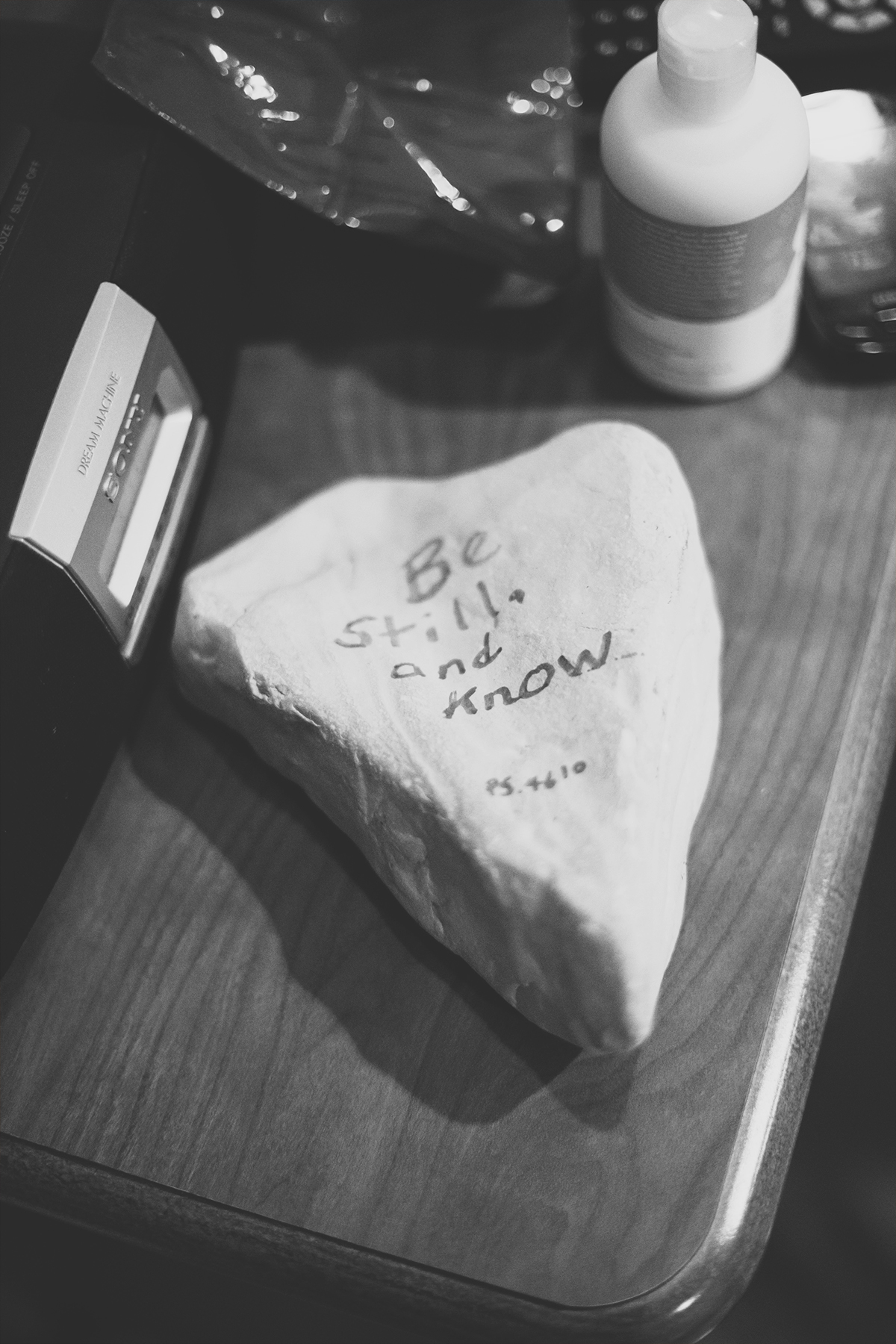 .
When life is hard, my loss grows unbearable. When it’s going along okay, I bear it well… or at least most days. Well, life is hard right now. So finding those words tonight in the most unexpected place meant so much. I can’t very well carry a large rock around with me everywhere I go. But I do remember the mom who gave it to me telling me to always remember the words on it when hope or faith or endurance begin to fade. Just be still… and know that He is God.

Driving to the photo shoot location tonight to take senior portrait pictures of the girl with the tattoo, I felt overwhelmed. The most overwhelmed I’ve felt in a while. I arrived at the shoot, and there it was… a tattoo, not yet one week old. It wasn’t hidden. In fact, my client very much wanted her tattoo to be part of her senior portraits so she pointed it out and asked me to capture it.

This high school senior I photographed will be heading off to college next year, where she wants to study to be a neonatal nurse. Well… if that isn’t very near and dear to my heart for obvious reasons. And like I said, I don’t even know the significance behind her choice of tattoo, but tonight, it was there for me… because I definitely needed it.

While the rock, or any other form I find those words in {not excluding my actual Bible}, contains words given to me that were meant to remind me where to turn and how to think when losing Anysia feels too heavy a burden, I know it can apply to any thing else I carry… any other difficulties I bear, whether health concerns, financial worries, strained relationships, insecurities about this whole photography thing or wondering if age and/or weight gain {only one of which I can do anything about} have caused me to lose things I might have otherwise had… shoot, even the world at large and all the political or social stresses out there can be burdensome. These are heavy things I’ve been carrying around, even heavier when carried all together.

I was sort of in I-give-up mode on the way to my shoot. But words of a different nature met me there. Not give up, but be still. And I was floored that God {who also met me there… or maybe just went before me, as He was with me the whole time} would be so kind as to give me what I needed right in that moment, because I think He knew that I couldn’t add one more thing to that heap without falling over. He can and does use anything.

I just need to be still. Words so easy to type. Much less easy to do.

It’s not like seeing that reminder tonight was some magic pill. I still came home feeling the weight of everything. And as I set out to begin processing the photos for this senior portrait photo shoot, I caught myself right back there worrying. Well, it was more like I was bouncing my leg up and down anxiously, so really, worry was being channeled through that one leg… it’s even going right now. The irony! I’m writing about being still… being reminded to be still. I’m looking at all the photos of the girl who had the words permanently marked into her skin… and I’m still not heeding its call. I’m doing the very opposite, actually.

But my nature does not take away from God’s, and I find it no less uplifting to get the reminder I did than if I could manage to keep my left leg still. Although, I suppose I should actually do what the words say… not just appreciate that I got to see them unexpectedly. Otherwise, what a waste of a wink from God, no?

Good thing sleep is around the corner. I’ll definitely be still there. I wonder if this is what God meant by His words be still and know that I am God… Sleep on it. Pray on it and get some sleep.

I hope it carries through into the morning. Everything has always seemed better in the mornings, even when they looked so difficult the night before. Renewed… like God’s mercies.

← Thriving In Every Season
Finally!… Florida →

8 thoughts on “Be Still”