Because It’s Not Every Day…

Orange cauliflower at a roadside farmstand.

A bundle of carrots whose colors were almost as numerous as a rainbow’s.

A Monarch butterfly that is injured, and thus, will stay still long enough for someone to photograph it.

A fluffy yellow caterpillar {first time I ever saw one at this house, actually… and maybe in my life, as was definitely the case with the orange cauliflower}.

Oh… and a smart phone with my name on it! Well, not literally, of course! I’ll explain below.
.

It’s weird, because today I seemed to come across a bunch of things I’ve never seen in my 44 years. One that didn’t get photographed was a strange-looking tall, round, pod-like flower I discovered in the fen I walked through with Izzy and a friend this afternoon. If I had taken my camera with, I would have gotten a photo for sure.

I like how you can go through half your life {or at least I hope I’m going to make it another 44 years… or more} and not even see something ever before until… boom… there it is right in front of you.
.

We stopped at a farmstand this morning to see what there was, and we bought a few things…
. 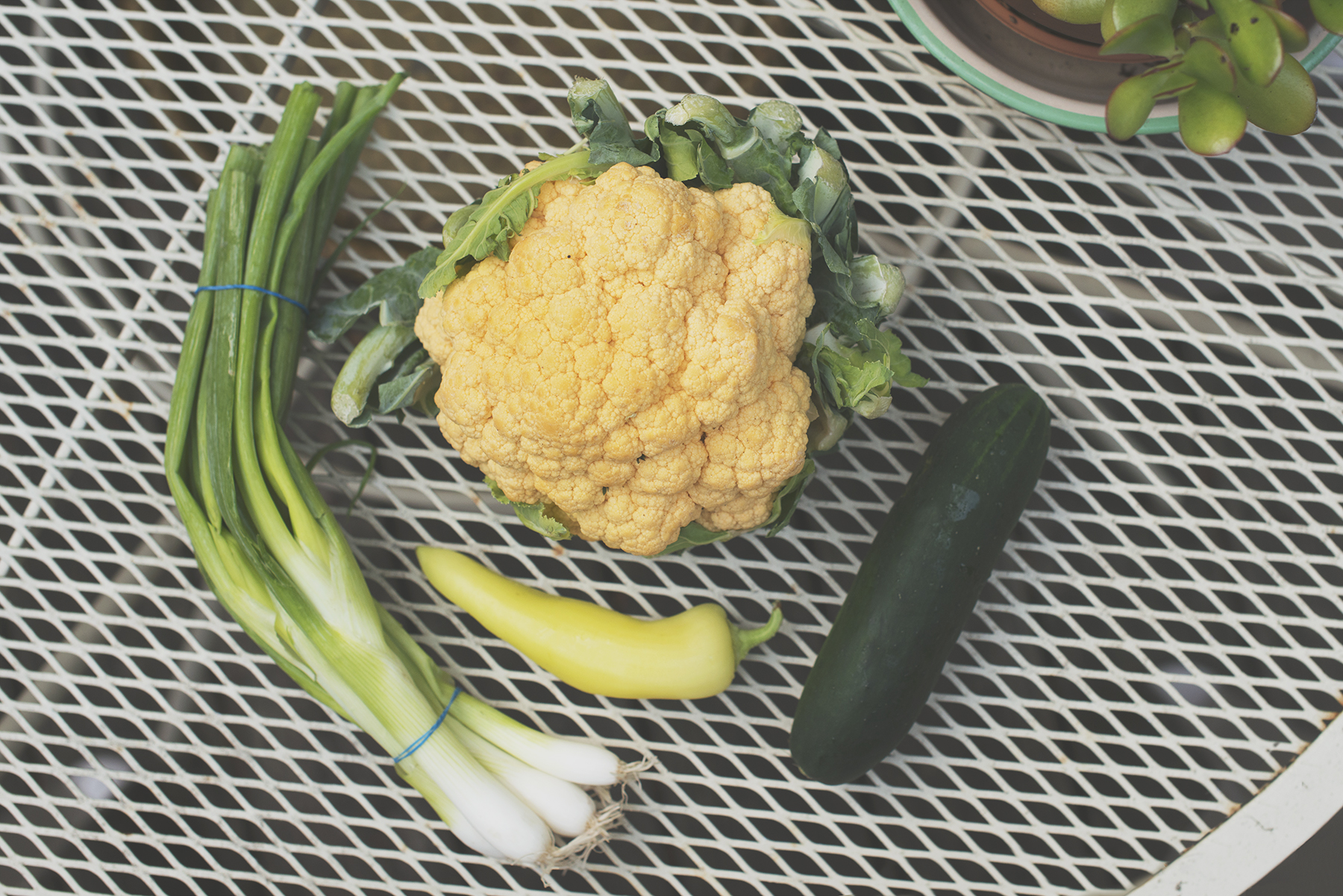 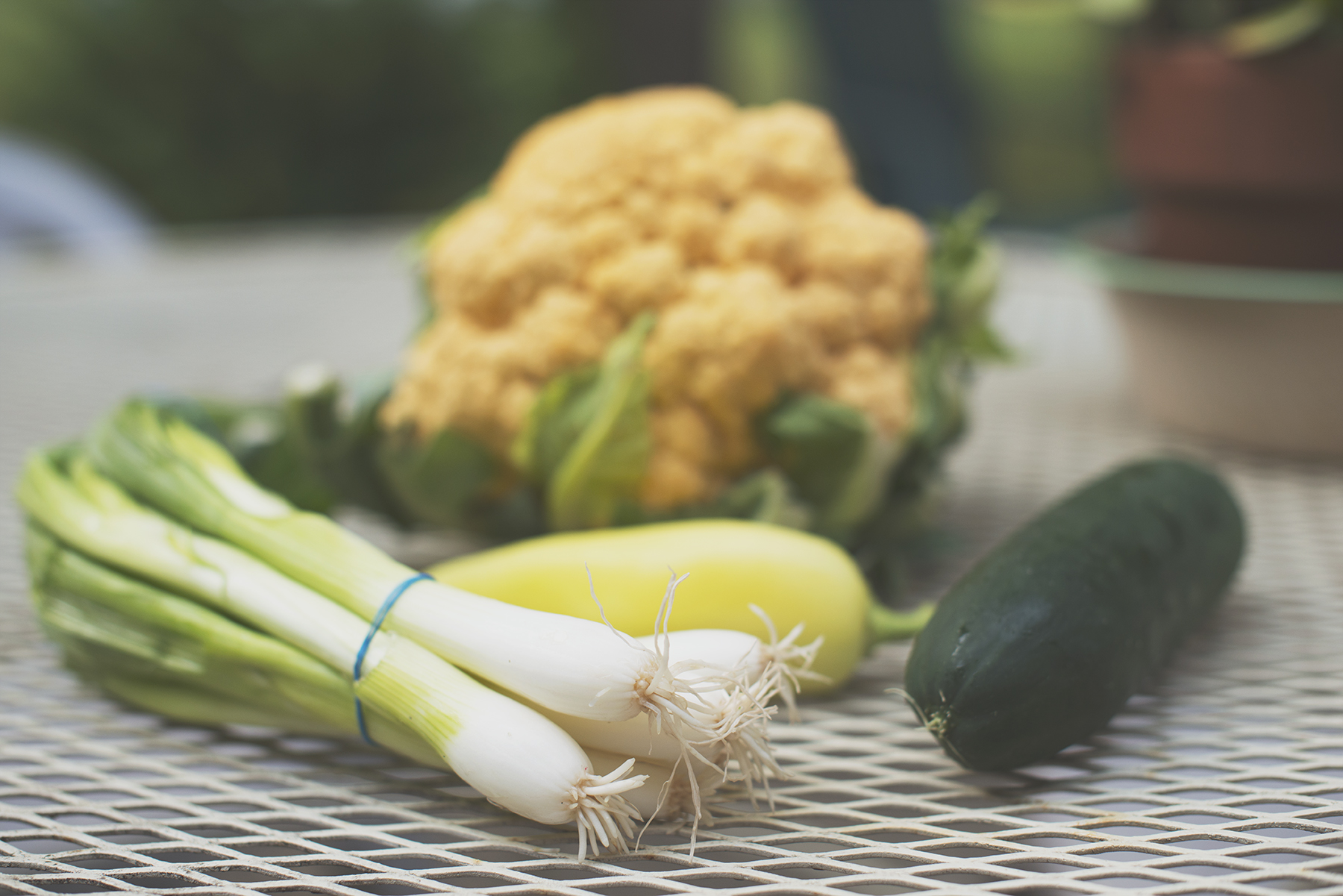 I guess not anymore. Apparently there are green and purple varieties, too. It’s not even like the orange variety {they call it Cheddar Cauliflower because of its color, not its taste} is some new breed that just emerged onto the scene recently. It’s older than I am. This site says it was discovered in Canada in 1970. That’s a whole year before I was discovered.

I guess the orange color is due to a mutation that allowed the plant to hold more beta carotene. {I know it looks sort of like a light peachy color here. But trust me… it really is very orange, especially in the sense that it’s not at all white like it is in my limited database-of-facts-and-observations-mind.} Well, anyway, I like knowing that it’s chock full of beta carotene. It’s got the benefit of carrots, but the yummy cauliflower flavor I love, and it is supposedly more mild, sweet and creamy than traditional cauliflower. The purple variety is said to have a nutty flavor. Must find that one if that is true! Seems it would make a great soup. I just don’t know how well I could pull it off in a soup, though. I can’t imagine either of my boys trying purple soup. Orange-colored, on the other hand, I can see them getting on board with. Too bad it has started to warm up again around here. The cooler Fall-like weather we were having up until today would have been perfect for an orange-ish harvest veggie soup… with some real cheddar sprinkled and melted on top!

The one I bought today will just have to accompany the salads we like to make on the warmer days. Or maybe I’ll freeze it and save it for that soup after all.

But I digress. I do love finding new things. It somehow makes me feel like I’m not so old {and not feel as if I’ve seen it all already because old-enough-to-have-seen-it-all is just how long I’ve been around}.

Something else new—but this time, yellow—also crossed our path today…
. 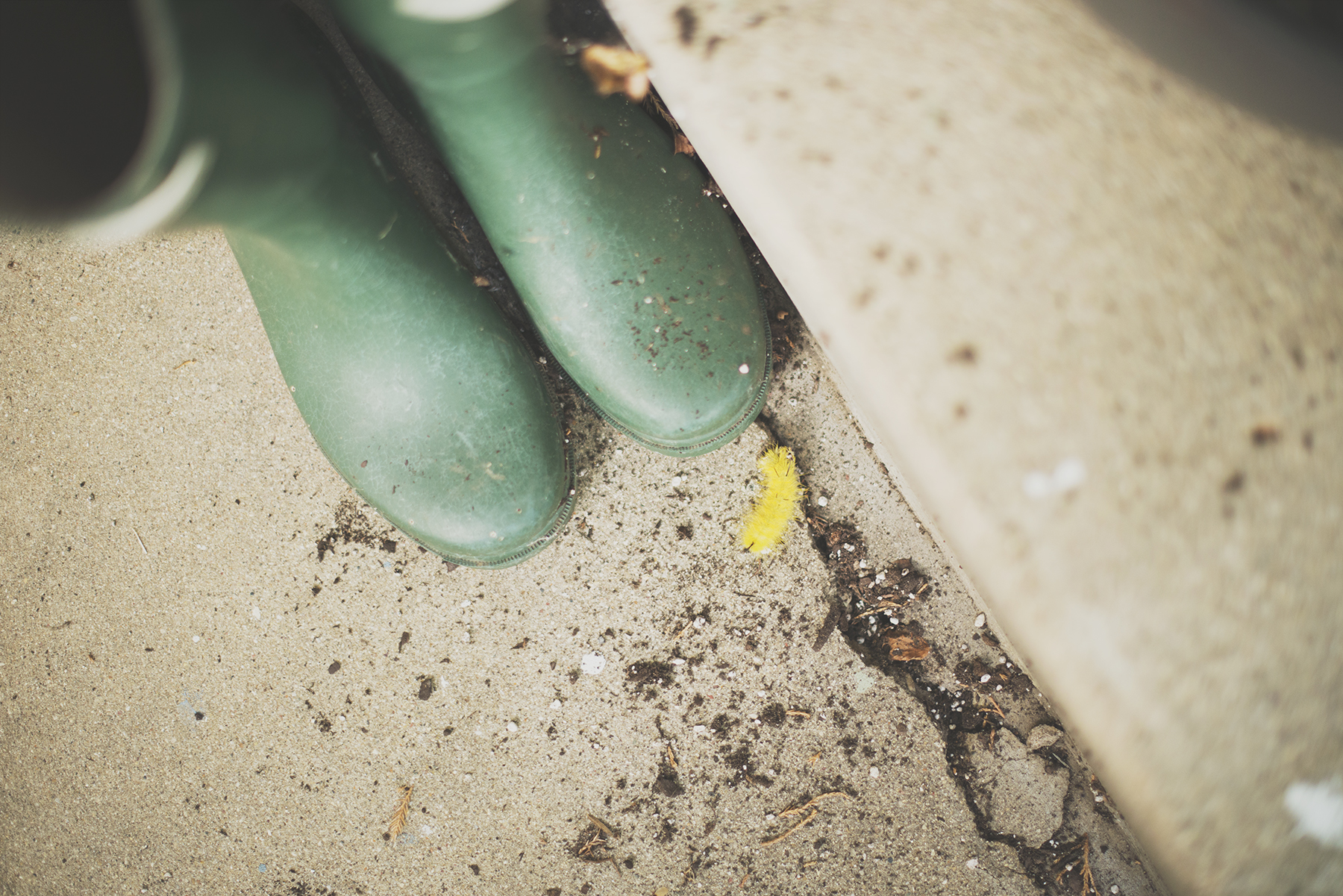 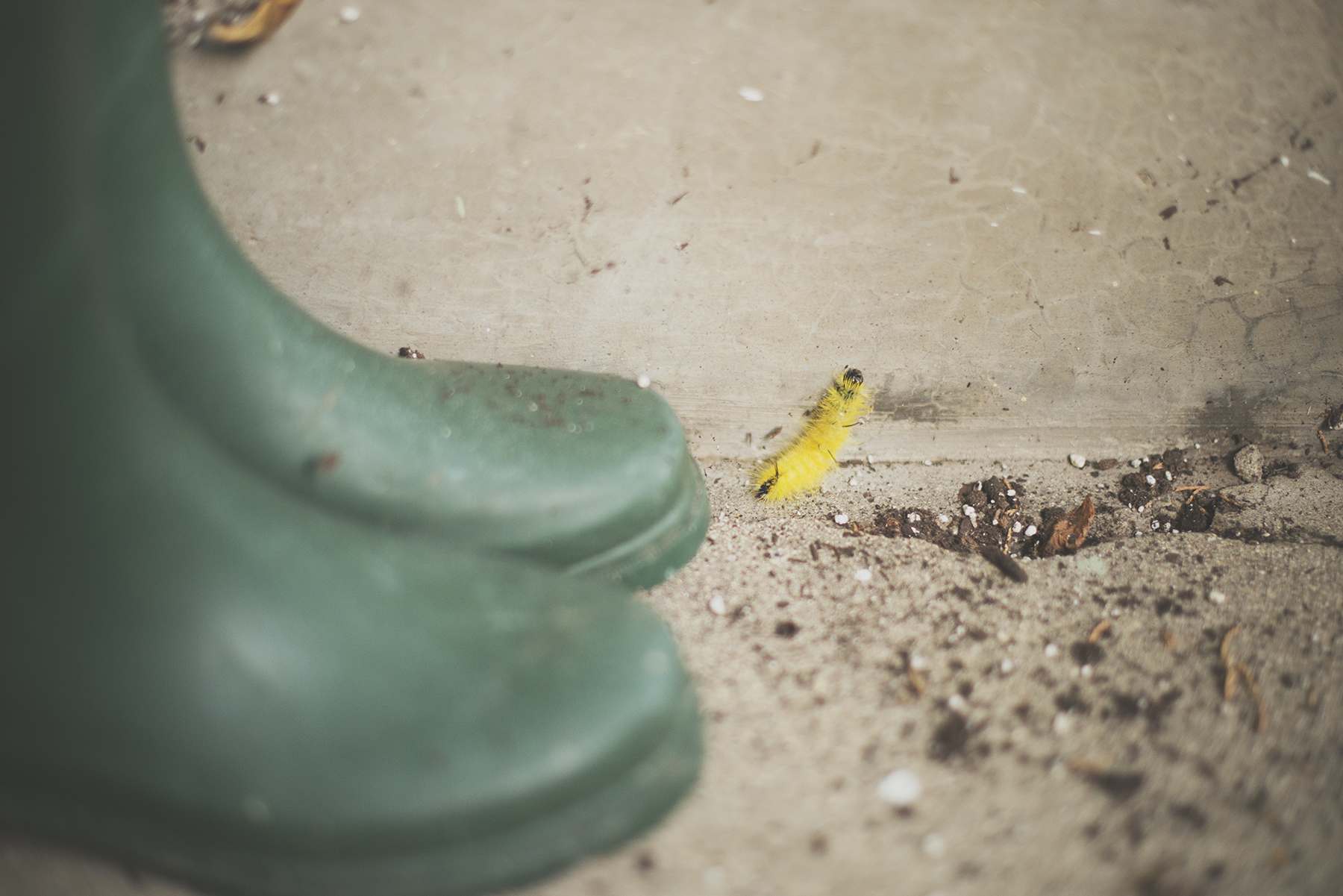 .
While I’m sure I’ve seen at least one yellow caterpillar at some point in my life, I don’t recall such a sighting. So, seeing this one today was still sort of a never-before experience for me. I’ve seen those fuzzy, bright-green critters plenty of times. But not the yellow. Izzy and his neighbor friend and I had fun following it around. They are quite fast for their small size… and seem to be on a quite a mission when they are on the go. They’re no snails!

Actually, I don’t know if you can even call these little guys caterpillars. They might technically be something entirely different. But that’s what we’ve always called furry little inchworm-like creatures.

Wait… scratch that. I just pulled up Google and got as far as typing “fuzzy yel” into the search field when “Fuzzy Yellow Caterpillars” popped up. They are called caterpillars! And what I discovered from googling it is that those black spikey things we saw on our resident caterpillar were attached… I was wondering. I thought perhaps being fuzzy, it was a bit like velcro and was picking up debris along the way. YIKES! It seems they sting! I definitely know I’ve never seen that caterpillar now. I would remember those stingers! What is it with yellow and black insects and their need to sting?

So, Wikepedia says they turn into a moth. And this site says they are venomous and can leave welts on our skin if it is exposed to them.

I’m so glad I did not let Izzy touch the one we found! This explains what Mr. B told me he had witnessed when he discovered the caterpillar. He said it walked along the corner, where the walkway and house-siding meet, and suddenly came upon a spider web. I guess, at that point, a spider emerged from behind the siding to see what he’d caught {or what he hoped to have caught}, but then darted right back to where he came from when he saw who was visiting. The caterpillar didn’t get entangled, but, instead, took a detour around the web and then back en route again. That spider must have seen the black spikey things and knew not to mess with his potential captive!

I also found this video, which shows what I meant when I mentioned their speed.

How educational this day has been… on top of being out-of-the-norm. What would we do without Google? It’s amazing how much brighter our kids will be than we ever were because of the availability, instantaneity and accessibility of knowledge, facts and figures about things like fuzzy yellow critters. Not that, when we grew up, we couldn’t ever research things ourselves. But it was much more of a production to do so, compared to how it can be done now… anyone can google anything as soon as it’s seen or thought of… from just about anywhere.

Well… speaking of having that ability, I would not have been able to google information about the caterpillar if we had found it earlier in the day at the fen {unless we had asked my friend to look it up on her smart phone}. But because we were at home, I could look it up on the computer… still, a whole lot faster than driving to the library and looking through the card catalog or library database in order to hunt down the right section, aisle and shelf for a book that is all about caterpillars.

Anyway, gone are the days I will have to depend on my home computer to look something like that up. I am now the proud owner of my first ever new-to-me smart phone {which still isn’t connected}!

I bought a used iPhone 5 from a college friend. I just picked it up this morning! Like… Stop.The.Presses, ’cause, speaking of being 44, I thought I was going to turn 88 before I ever got one of those! I still can’t quite believe it’s true. {There will be no photo of my phone to follow. As excited as I was about getting the phone, it just didn’t seem like something I’d enjoy photographing.}

I can definitely add that to my “It’s Not Every Day…” list. But, from here out {or once I get it connected}, it will be a part of my every-day! I feel like I’m all grown up, now… like I can now rub elbows with the big kids! The number of people I know who still have old-school cell phones like my old one… well, it was about four. Now it’s one less!

I so look forward to the convenience that comes with a smart phone {and to having an Instagram account}! Not that using an old-school cell phone is all that inconvenient. I mean… it’s a phone. And it’s mobile. How much more do we really need? But I actually think this is going to benefit me as a photographer, so I am just so excited.

Well, enough with all the talk of something man-made, and back to the nature-related rarities that were sprinkled throughout our day.
. 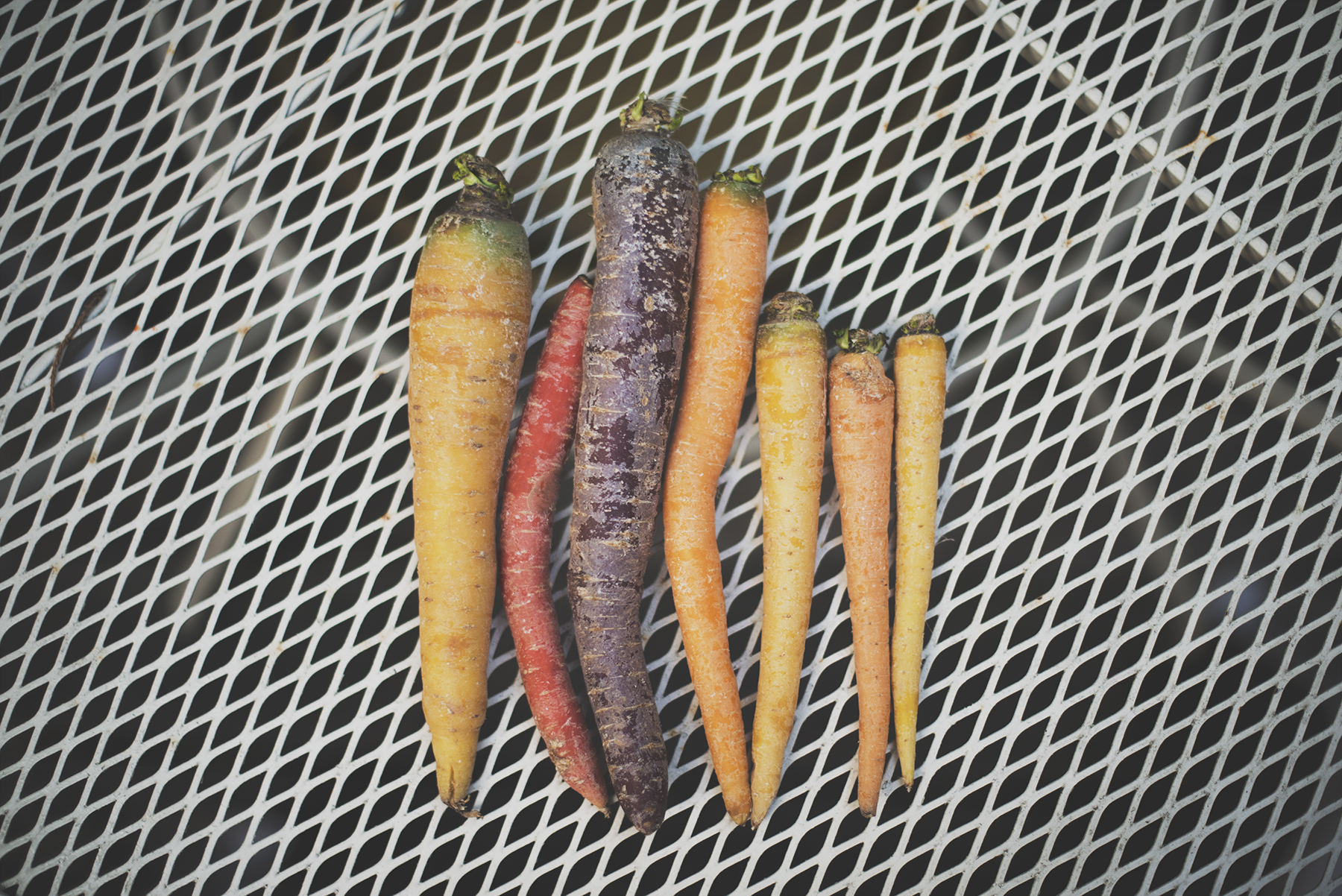 .
I have seen multi-colored carrots before… have even eaten them at a fancy restaurant or two somewhere along the way. But I’ve never bought them… so this was also a first… a not-every-day thing for me. I can’t wait to cook these!.. but almost don’t want to, as well. The rustic colors are just too lovely. {We bought nectarines at the farmstand with all the veggies, too. But one can find those in just about any grocery store in any town, so I didn’t bother taking a picture to go along with the theme of my post. But do not get me wrong… I can’t wait to sink my teeth into one of those! Neither can Izzy… they are one of his favorites!}

And speaking of things caterpillar- and butterfly-related, my last-but-not-least rarity today was getting to photograph a butterfly we found at the farmstand.
. 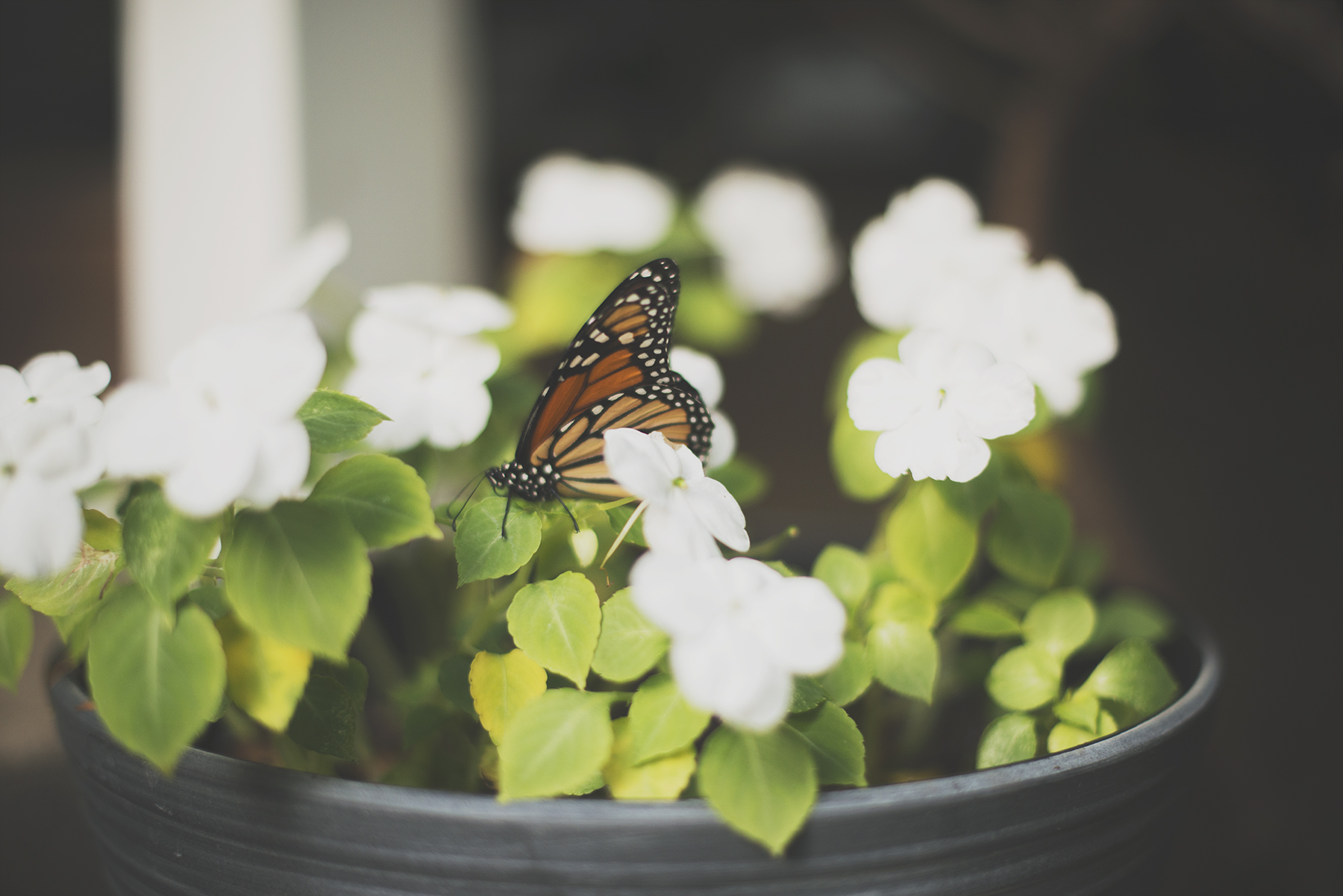 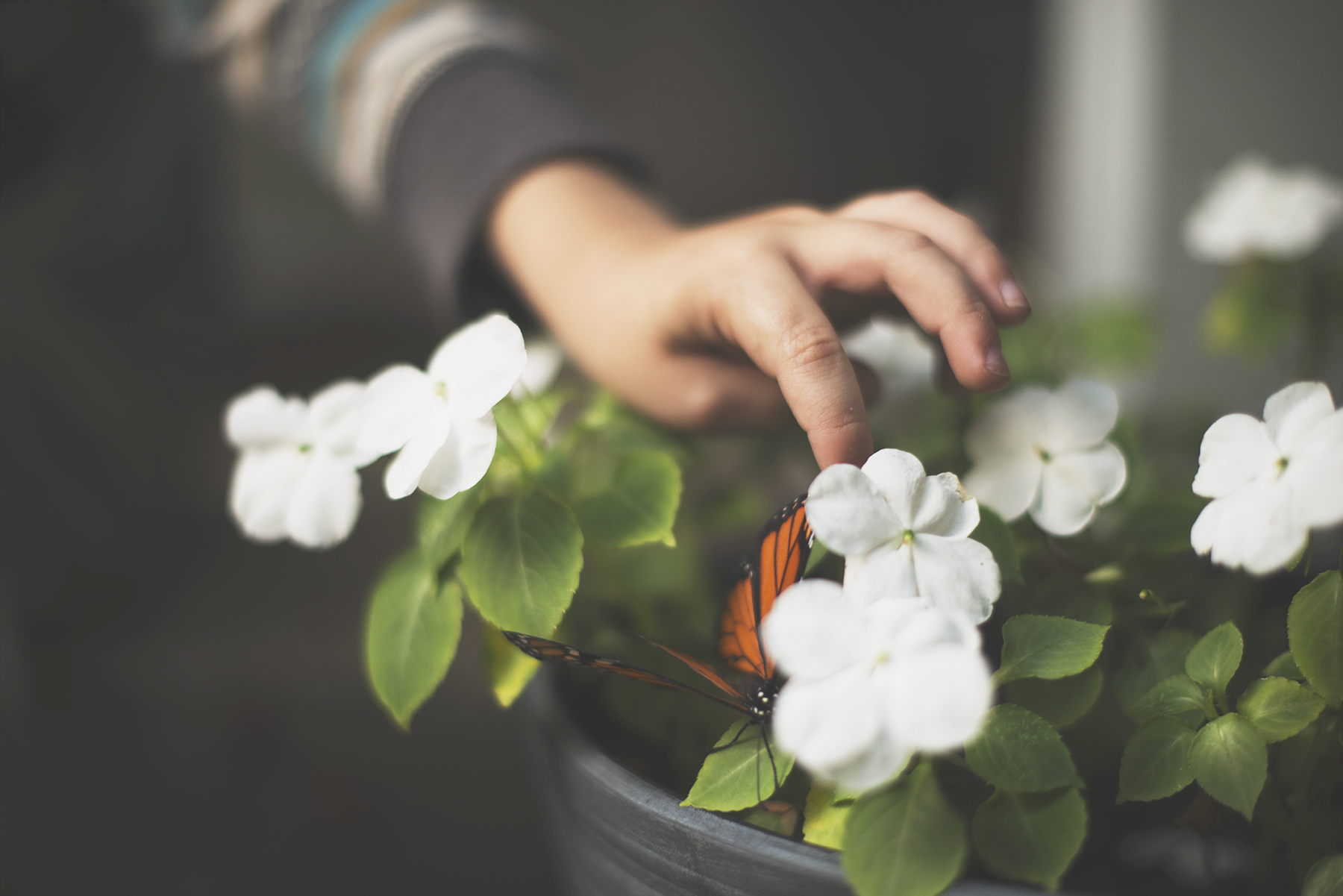 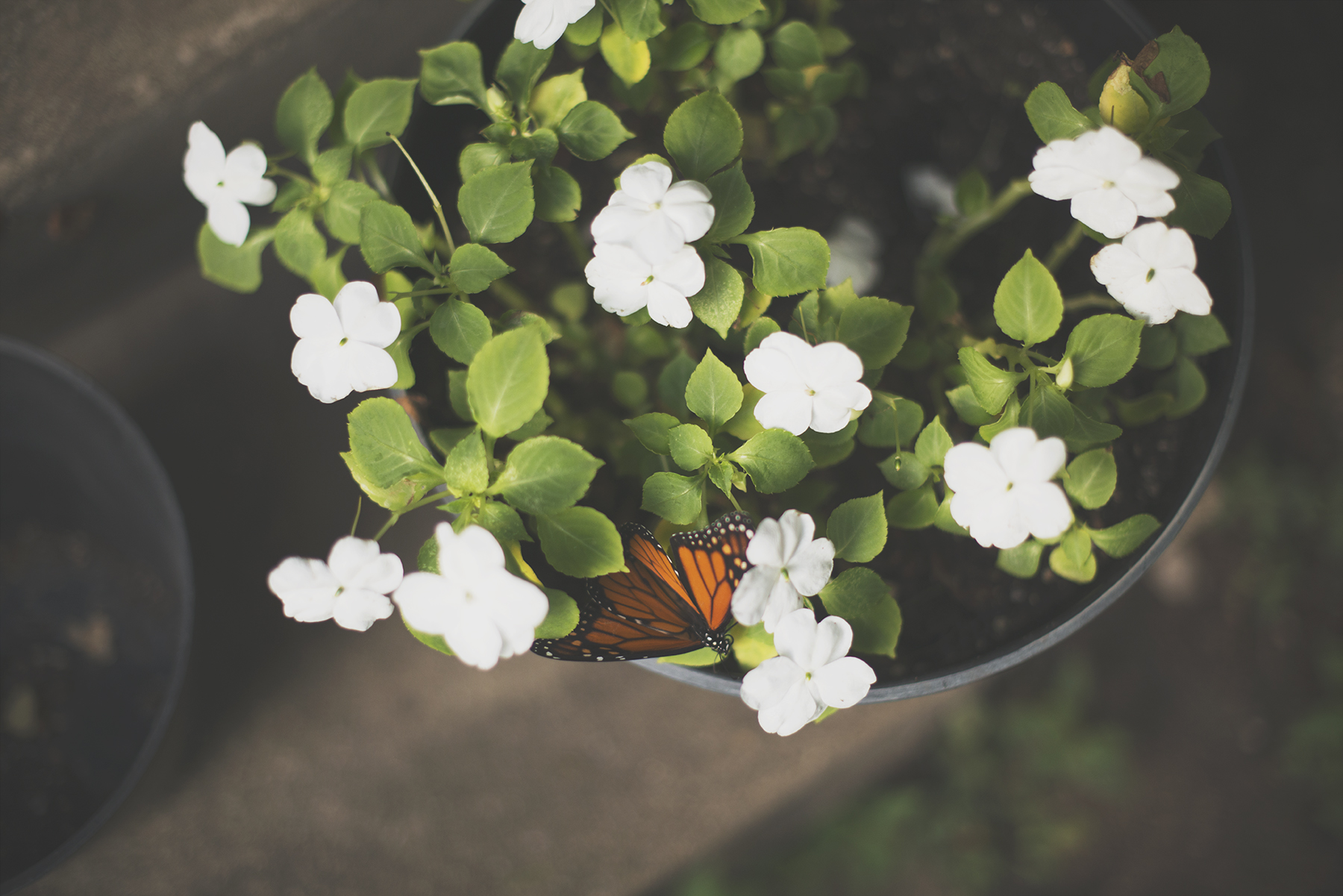 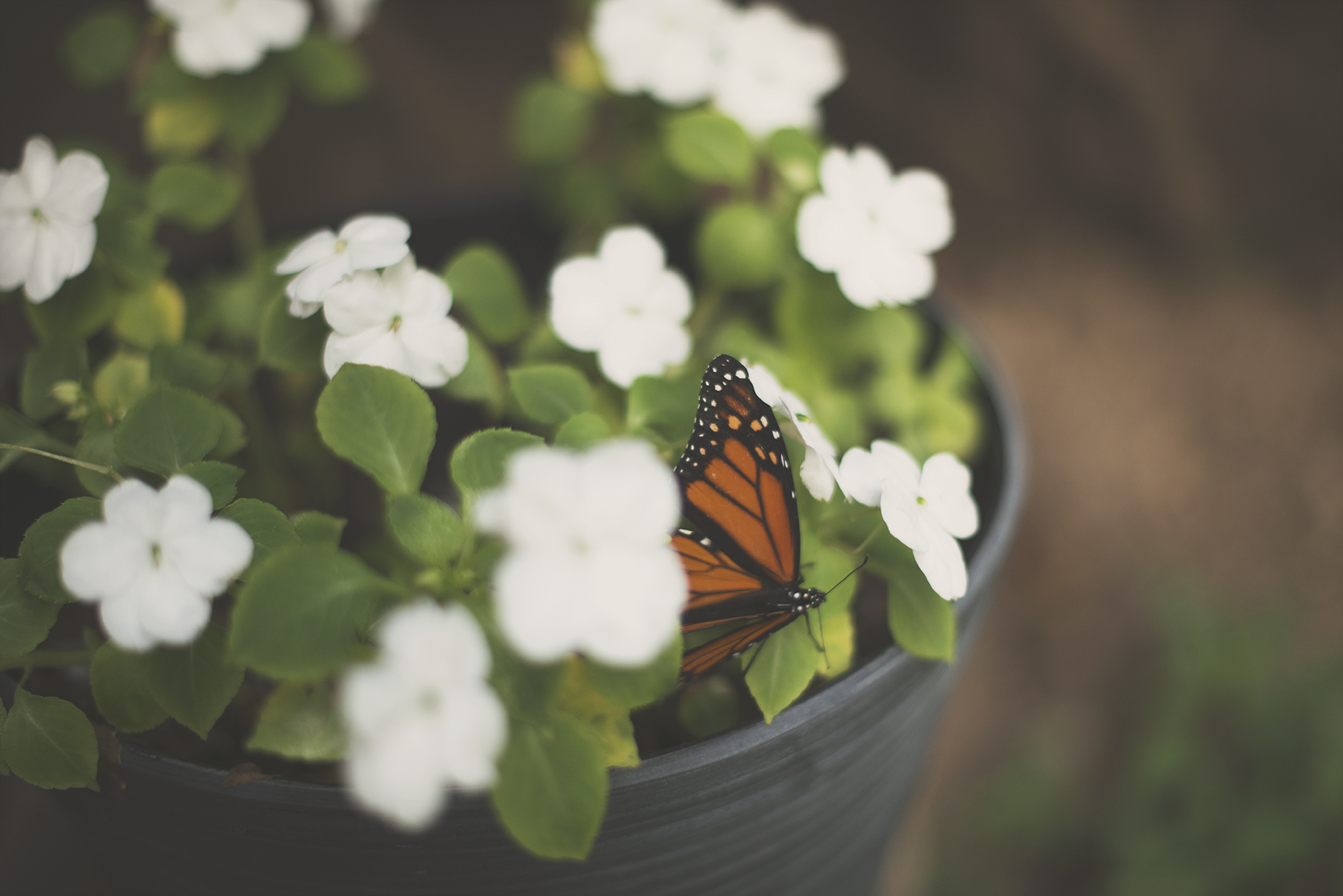 .
We brought it home, because it was injured and helpless in the parking lot there. Izzy was quite concerned about it. We hoped maybe it would heal or mend while resting at our home during our walk at the fen. But we came back to find it seeming even more lifeless, though still alive.

I took it outside to rest among my Impatiens. I thought it might be more content in an environment that’s a bit closer to what it is used to.

Our little invalid looked so beautiful with its bright orange coloring {Monarchs are one of my favorites}, and especially so among all the white and green growth in my flower-pot. It was then that I realized I had been given a perfect opportunity to take pictures of this butterfly {something I’ve always wished I could do with these apt-to-flee creatures} because of its inability to fly away on me. I felt sad for the butterfly, but my friend who walked with us today informed me that it might be at the end of its life cycle. Not sure, but if so, I know I’ve never had this opportunity before… so it was another first. To have a butterfly with us that might be wrapping up its time here, and to have the ability to take pictures of it.
. 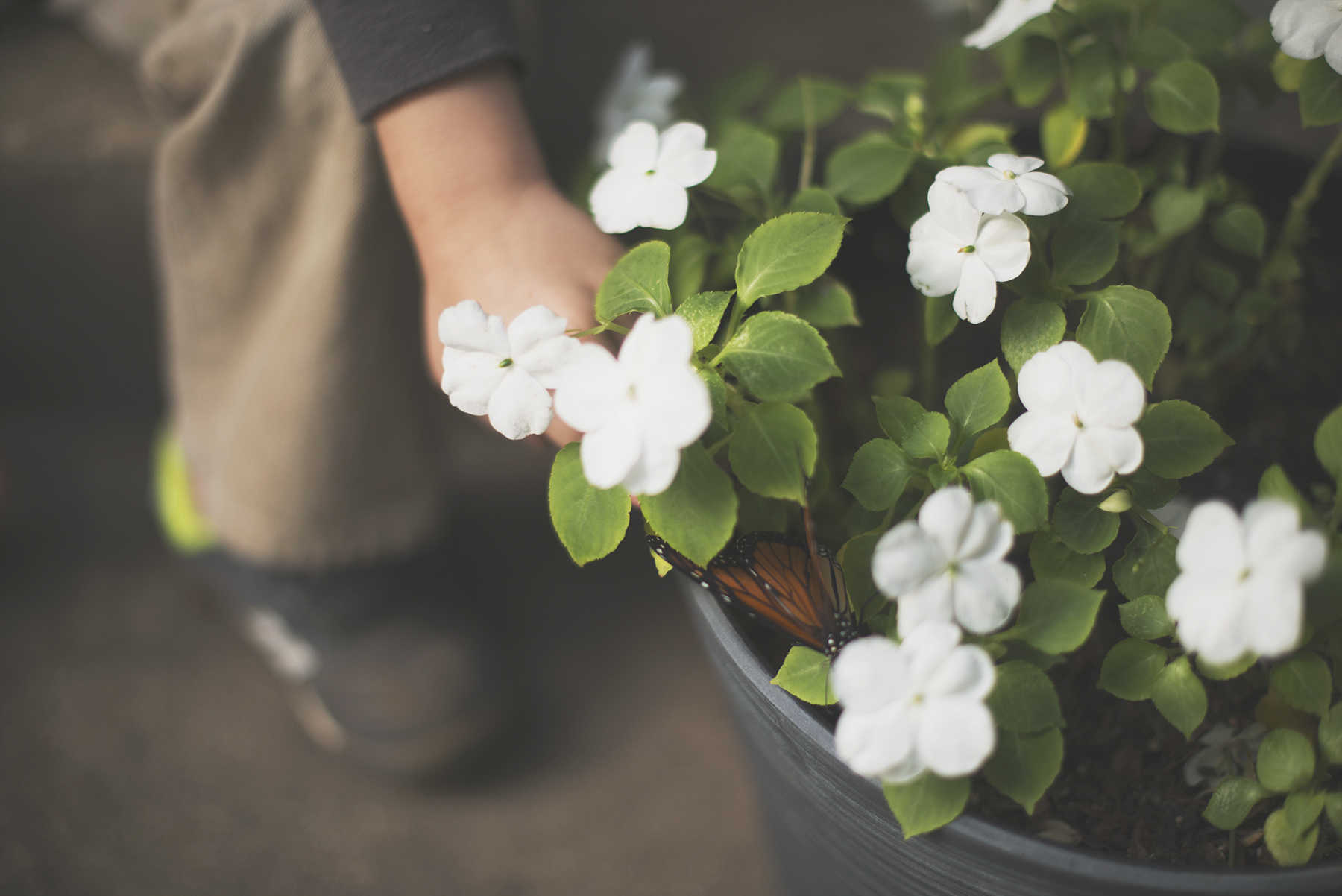 .
So pretty. How I love the coloring and pattern of Monarchs… of this Monarch. How Izzy wanted to save the small creature from what ailed it.

Well, there are my ramblings about our not-so-ordinary day. When most days are the same and life can get quite mundane, I think it’s healthy to journal when a day brings pleasant surprises… and a little education to boot!

2 thoughts on “Because It’s Not Every Day…”