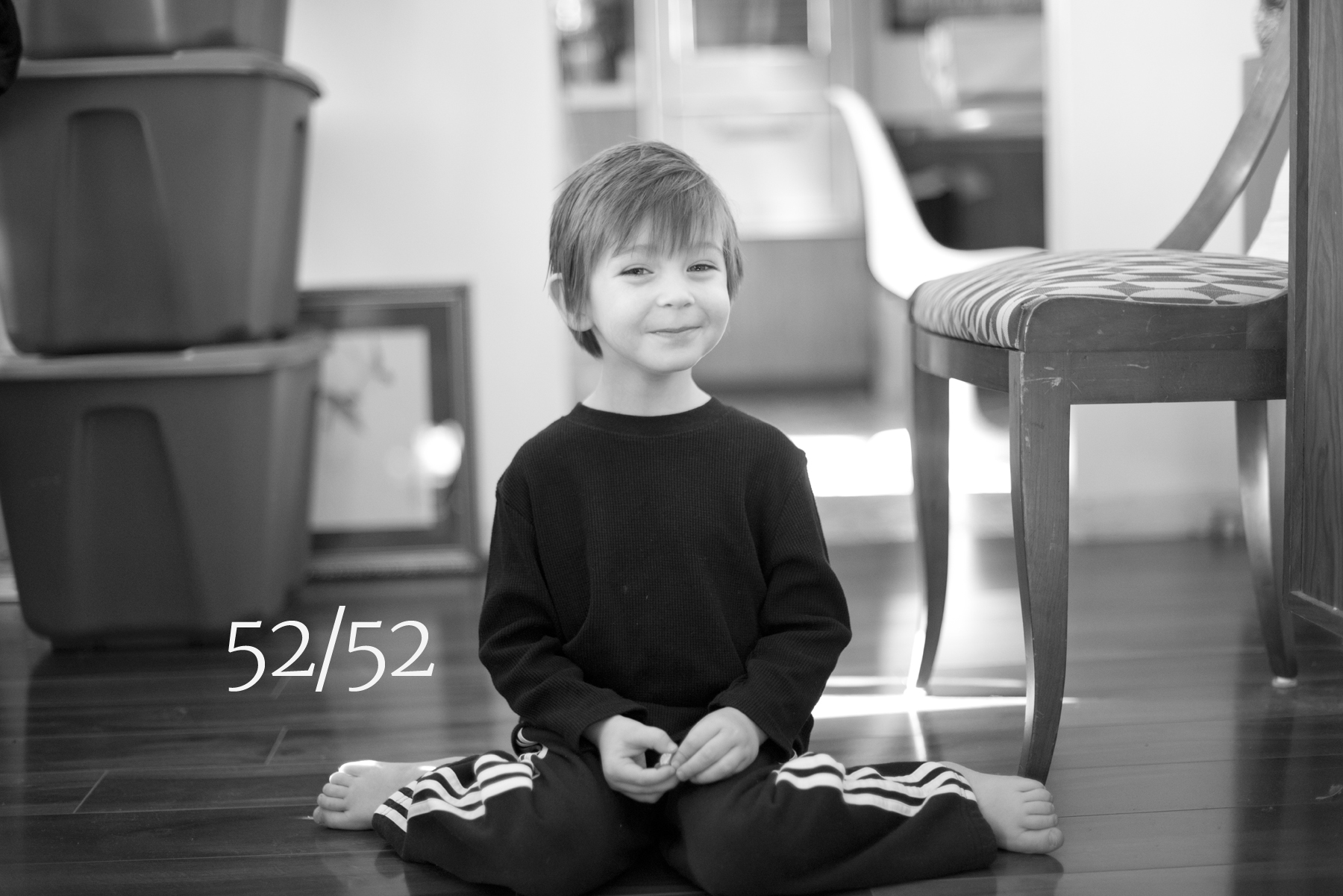 Izzy—Doing what he did a year ago for me, but instead of sitting for my second Project 52 post of 2014 {next photo below}, he’s sitting for the final one.
. 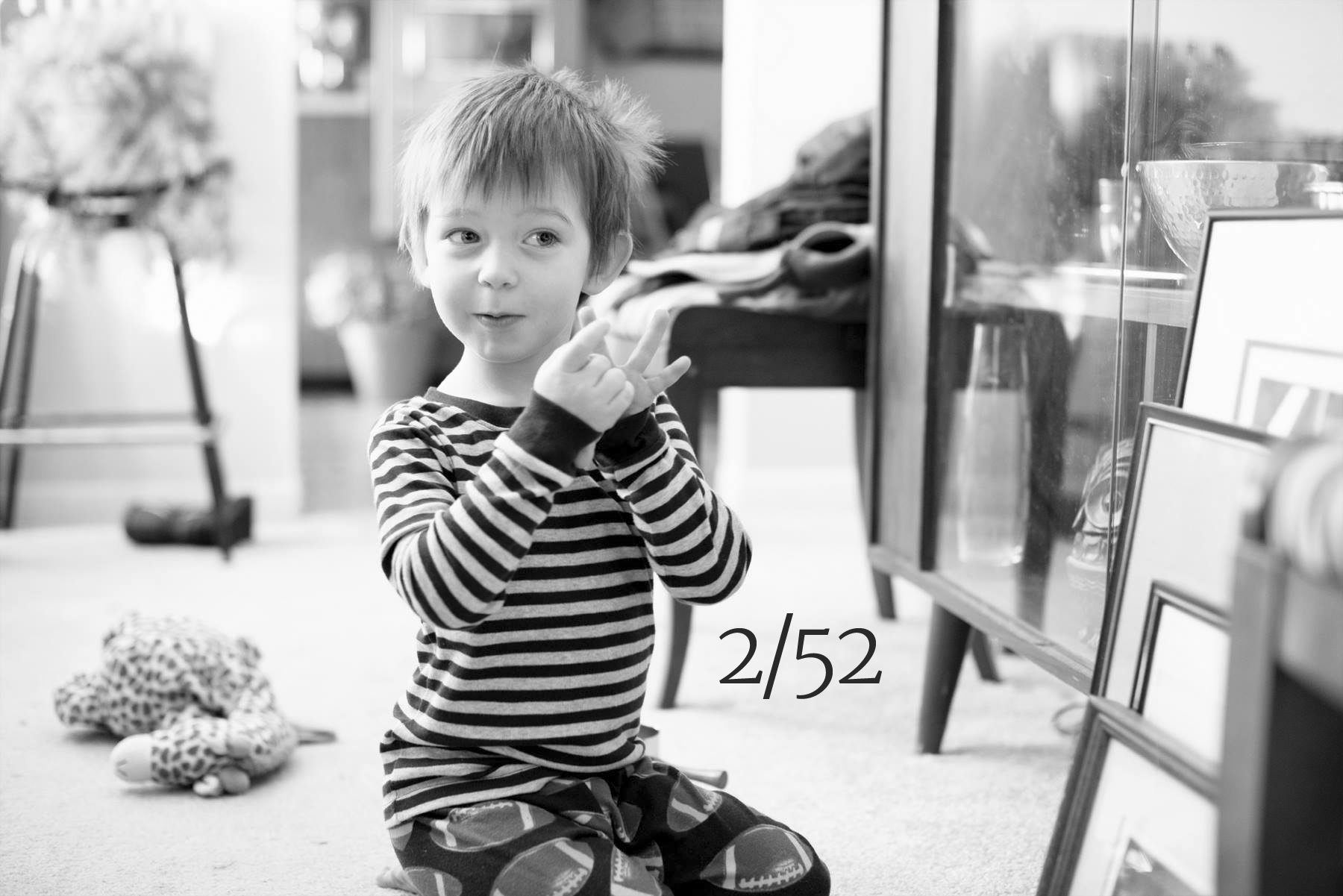 Almost a year passed between when the above photo {2/52} was taken, last January, and the first shot above {52/52} was taken, today. It’s crazy to see how much his face changed over the course of 2014.. and even crazier to think of how much everything about him has changed… in every way.
.
.

As promised, I am back to wrap up my Project 52 series for 2014. Just like the first post in this series, I couldn’t pick just one “portrait”. So I’m posting a bunch… just my super-duper favorites from the approximately 50 shots I took of him today… sitting there in that same spot on the dining room floor {now sans carpet} that he sat for this series almost a year ago.
. 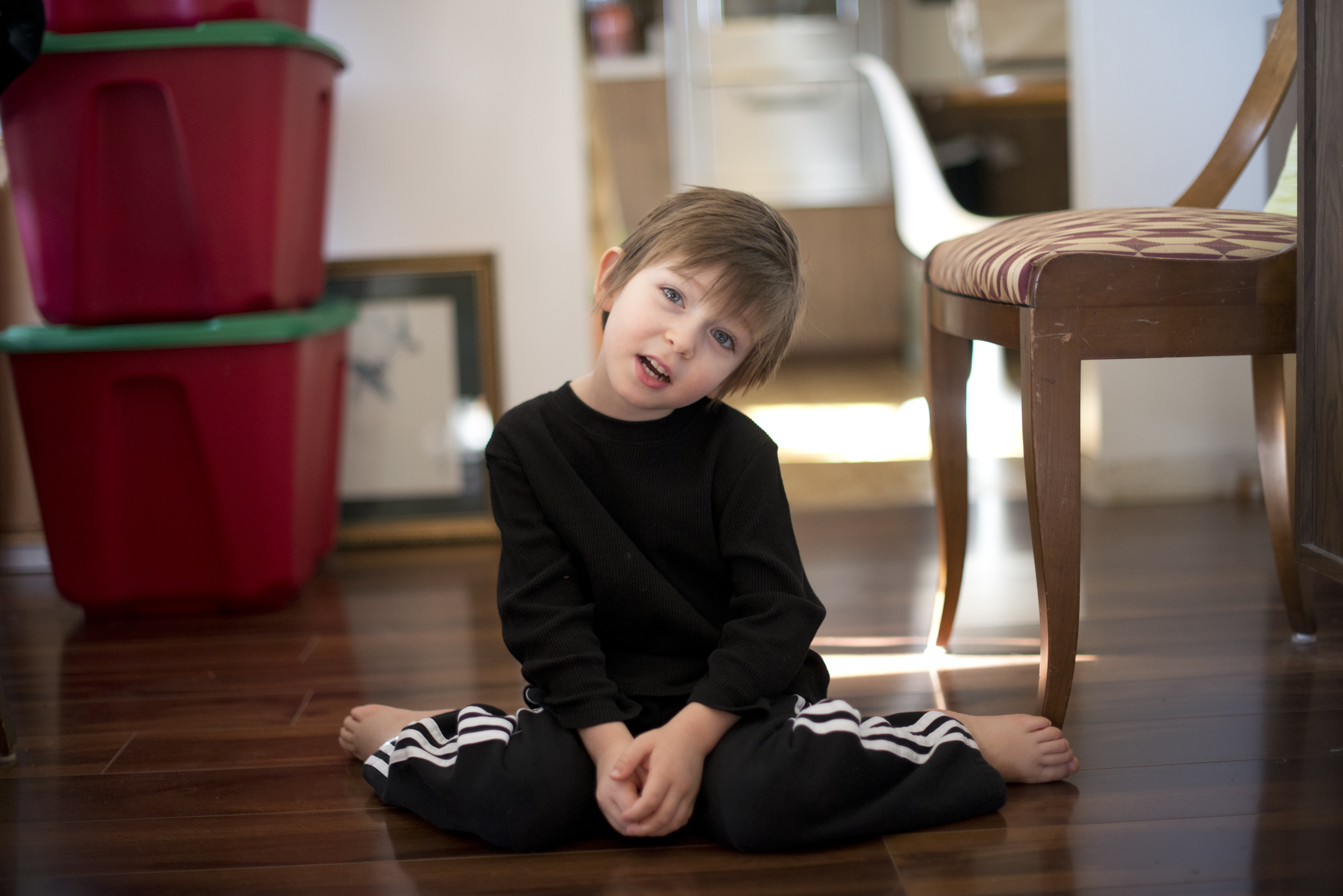 .
I can’t even begin to explain how glad I am I did this series. Of course, one of the goals was to be able to look back over 52 photos in 52 weeks and see how much a littler person his age can change in one year. But the other intent of my doing this project was to capture him and not let any of his childlike-ness evaporate away. I’ve got it all preserved here in these photos… all the outfits he wore {or skin he chose to bear because he would much rather be a peach crayon than clothed}. All the hair cuts he had. All the things he got into and nooks in our home that he loved to hang out in. All the places we went outside of home. All the expressions he had. All the beauty he covered our grief with.

I look at every single one of these photos and my heart swells with pride and joy. These photos are a gift to myself. I hope they will one day be one to him as well… and his family.
. 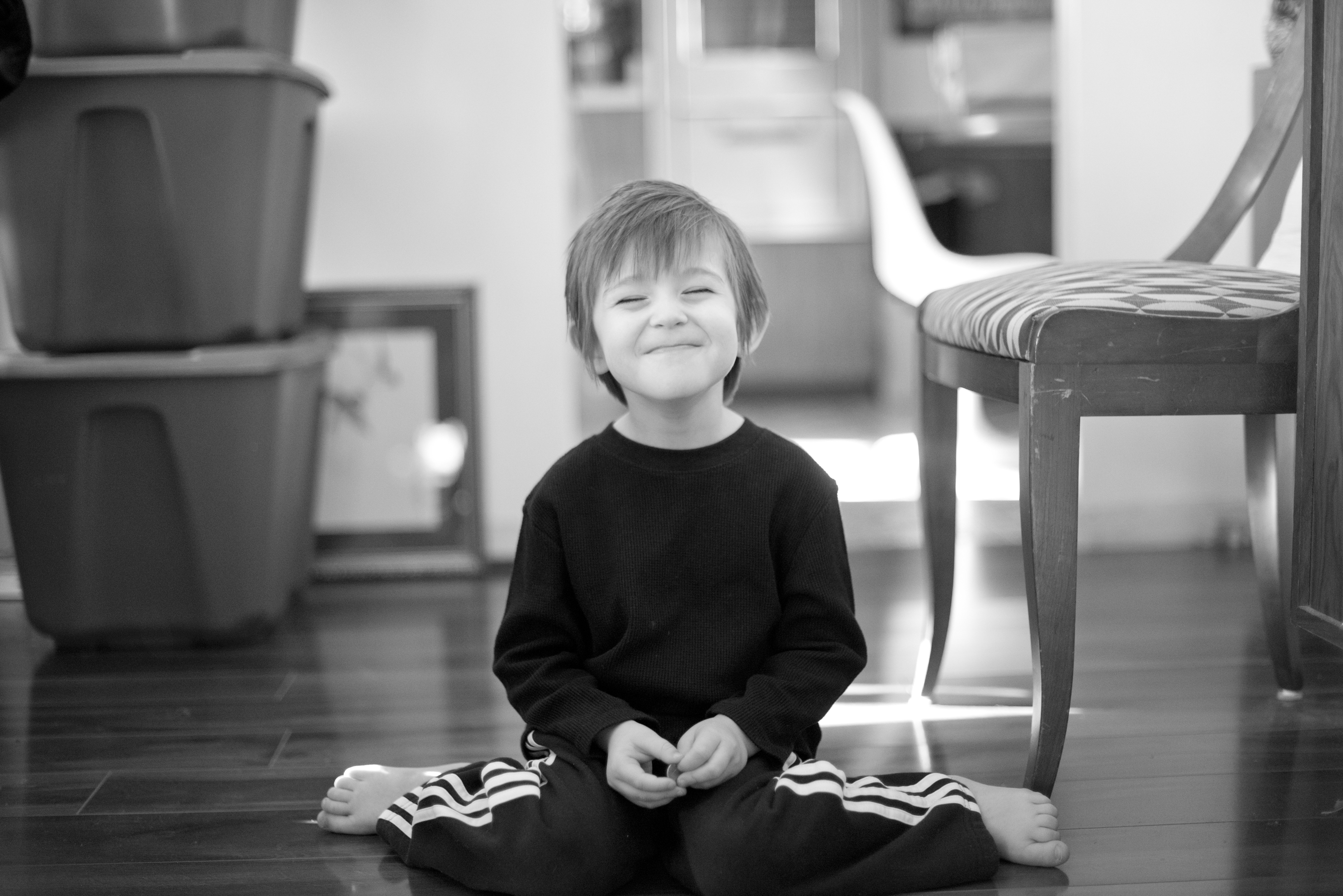 .
While I got a bit behind in my posting of the photos each week during my busiest work period the latter quarter of the year, I never missed a week of taking his photo, at least once in some place at some point. And I am so grateful I was able to keep up with it and be disciplined in not giving up on this project. I wasn’t always able to get Izzy-isms in with each post. But I’ve got several stored up from the past 2.5 months that I will share at the end of this final post.
. 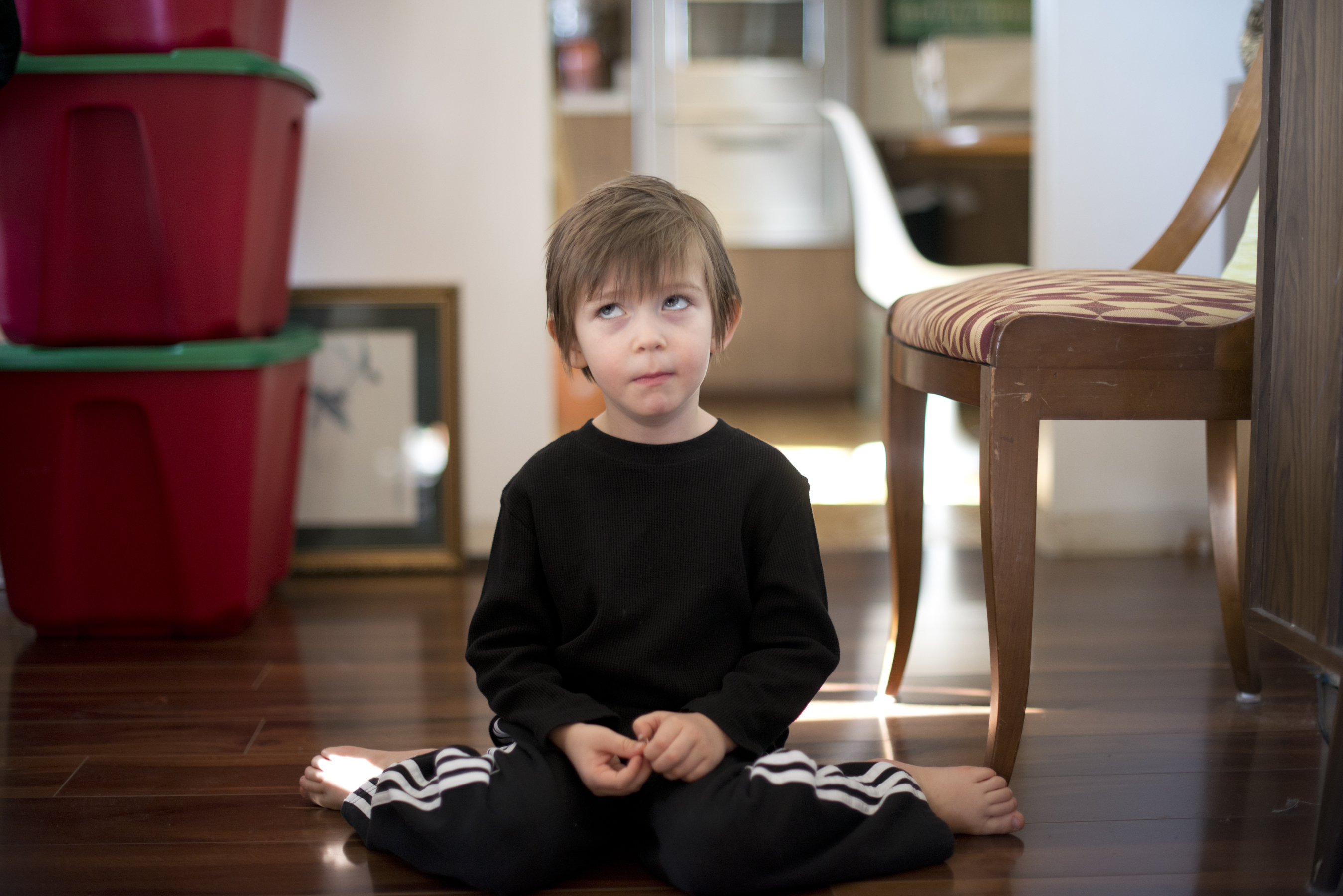 .
Rarely could I keep the posts to just one photo. But whether one or several, I figure I can use them to make myself some sort of week-by-week calendar for 2015!

I’ve already decided I will do this again for 2015, but I just might be posting once a month instead of once a week, so as to stick to the blogging break I want to take. My hope is that our 2015 will look a lot more outward… whereas we were holed up {or cloistered away as I like to put it} for so much of our first year after losing Anysia, I hope we are out and about, exploring and discovering much more in 2015… and I hope the photos will reflect that.
. 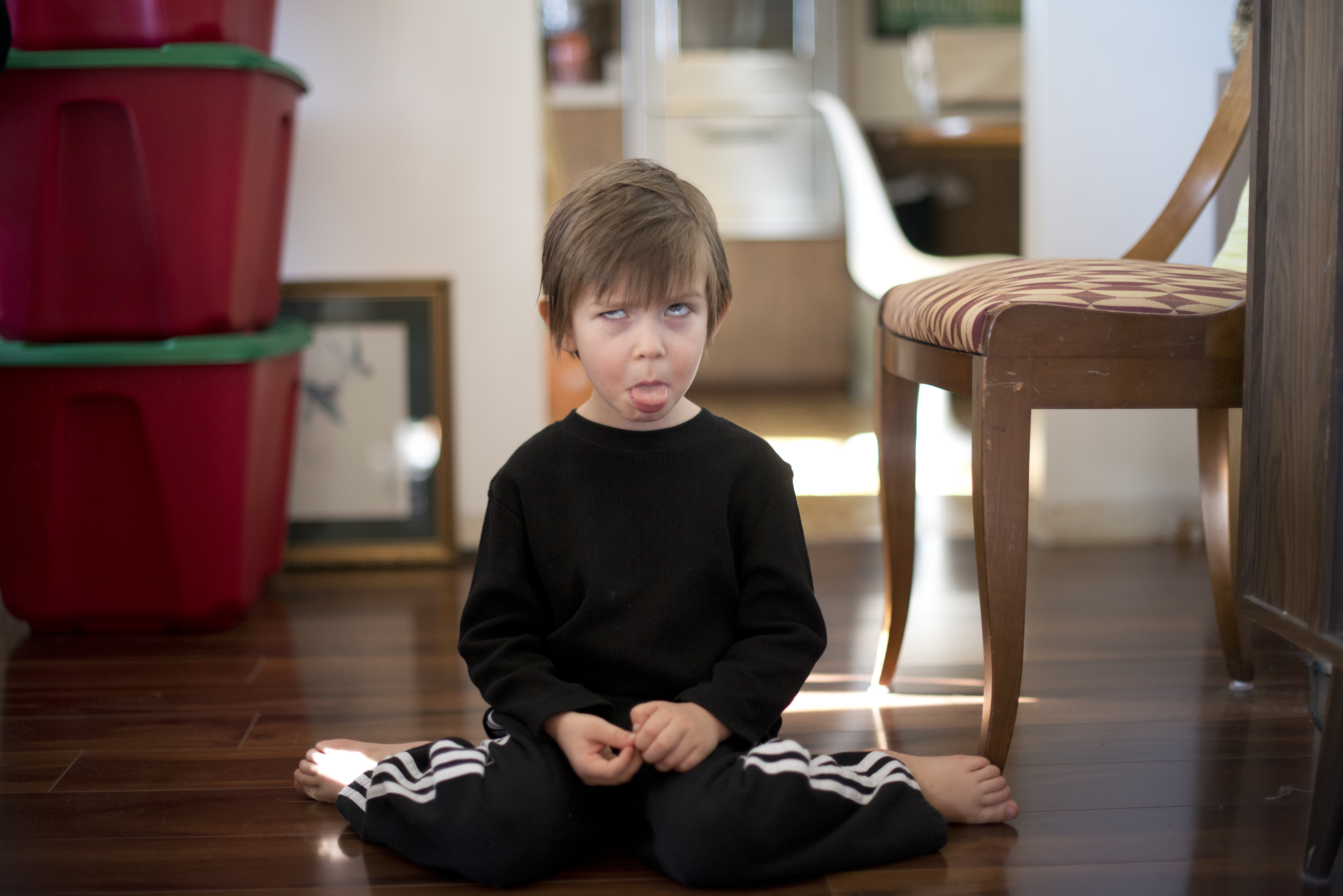 .
I figure I won’t be doing this much more as he gets older, so I’m very eager to get in at least one more year… while he’s still that little boy that I refuse to let grow up.
. 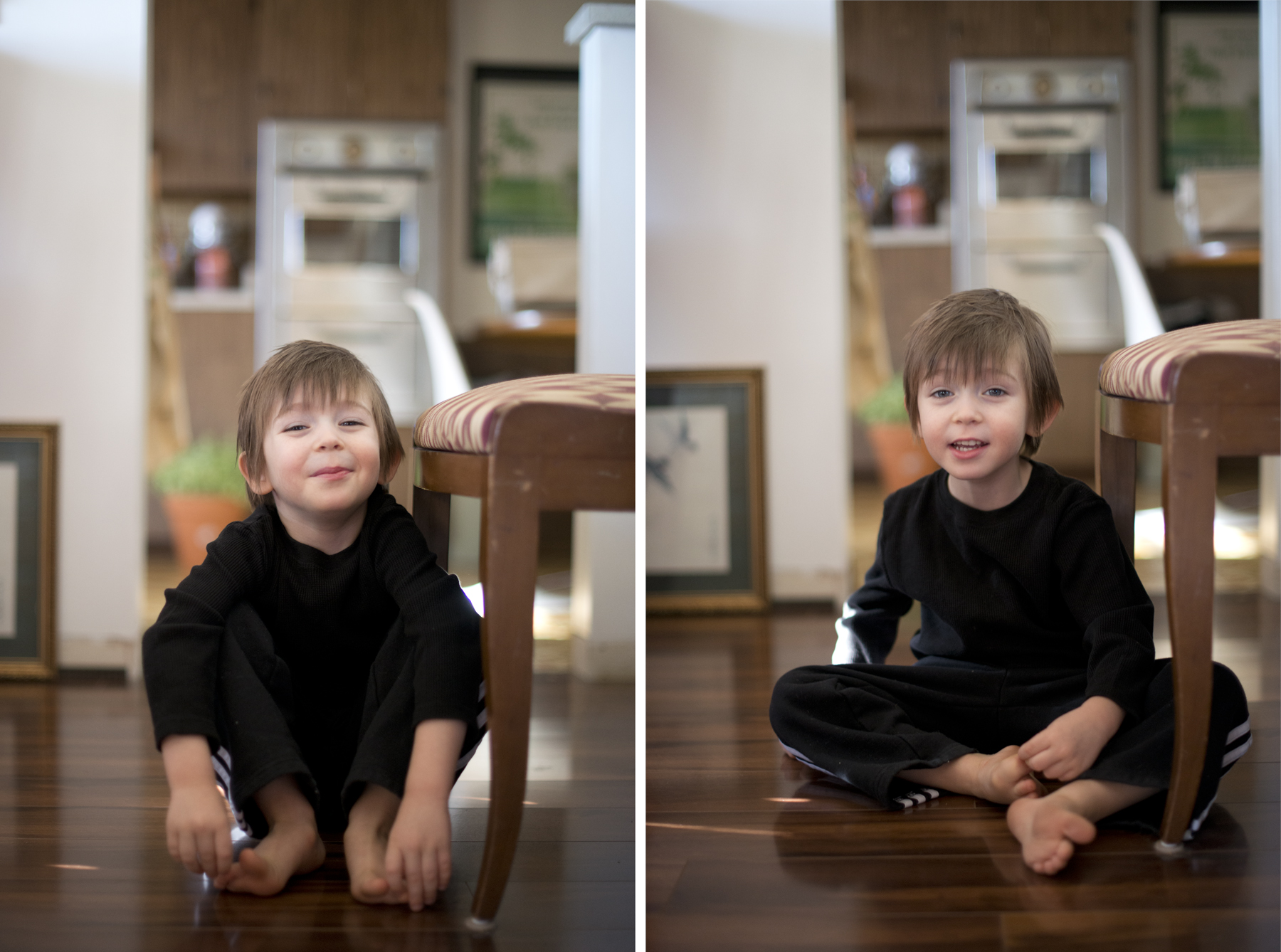 .
And now for some Izzy-issms that I’ve been writing and collecting over the past couple of months…

Isaac: Mama, I’m gonna call you pretty-schmetty instead of saying “I love you.”

Isaac {to Dada, after doing something he should not have}: I thought you’d be mad. But it turns out, you’re not mad!

Isaac {to Dada, outside after they saw a lady bug}: Lady bugs are pretty. I’m gonna call mama a lady bug.

Me: Are you ever gonna stop being messy?
Isaac: Uh… a couple weeks when I’m older.”

Isaac: If there were monsters in our neighborhood, I would say “Shut up!” to them.

Isaac {while listening to John Denver with Dada}: This feels like love. 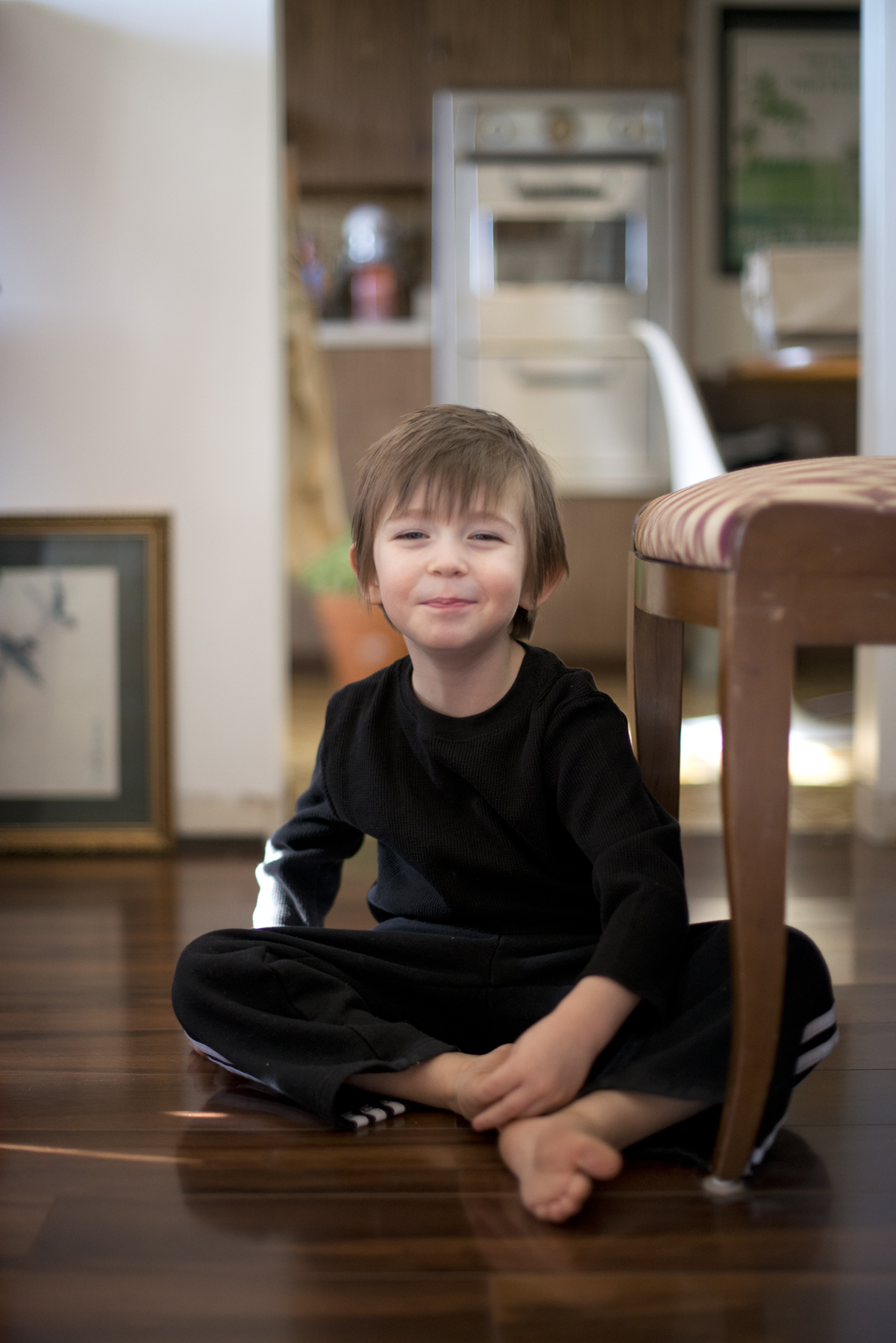 .
Isaac {referring to Dada while he was sick}: We should paint a picture of a guitar for him, because he likes guitars. And I will want to do that for my best friend, because Dada’s my best friend. So let’s do that, okay?

Isaac {to Dada}: You and me are crazy and cool. But Mama’s just pretty.

Me: You kept me up all night.
Isaac: But at least last night I said I love youuuuu…. a BUNCH of times.

Isaac: Mama, I know you like owls, ’cause they’re all over our house, so I know you like them. Dada said there are owls outside. So, do you wanna go hear them?
Me: Yes!
Isaac: Okay! Let’s go….

Isaac: I like going to sleep, Mama, but the problem is, I’m scared.

Isaac {after seeing some hearts on something}: That reminds me of you, ’cause these hearts are so beautiful.

{I had been showing him some pictures that I took of him on the computer.}
Isaac: Maybe if you take pictures of Anysia, you won’t miss her anymore.
. 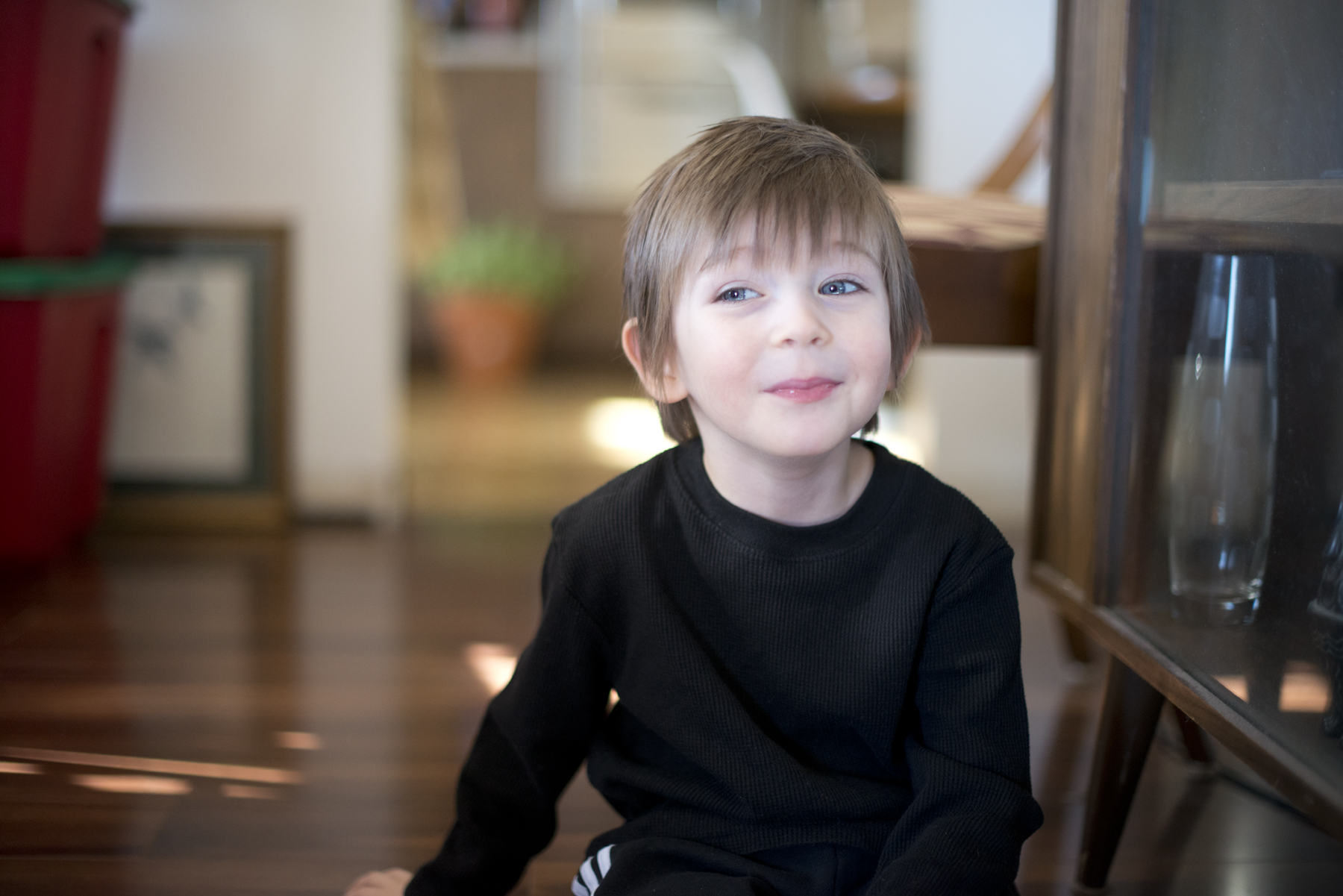 .
And my favorite new thing he {repetitively} says to me to get on my good side… if he’s done something he should not have or wants something from me…

Mama… I love you.
You’re a butterfly.”

I wish I had video of that one, because it’s more about the way he says it than it is what he’s saying that gets me every time. He’s pretty much figured out all my buttons, and that’s the one for my soft spot, for sure.
. 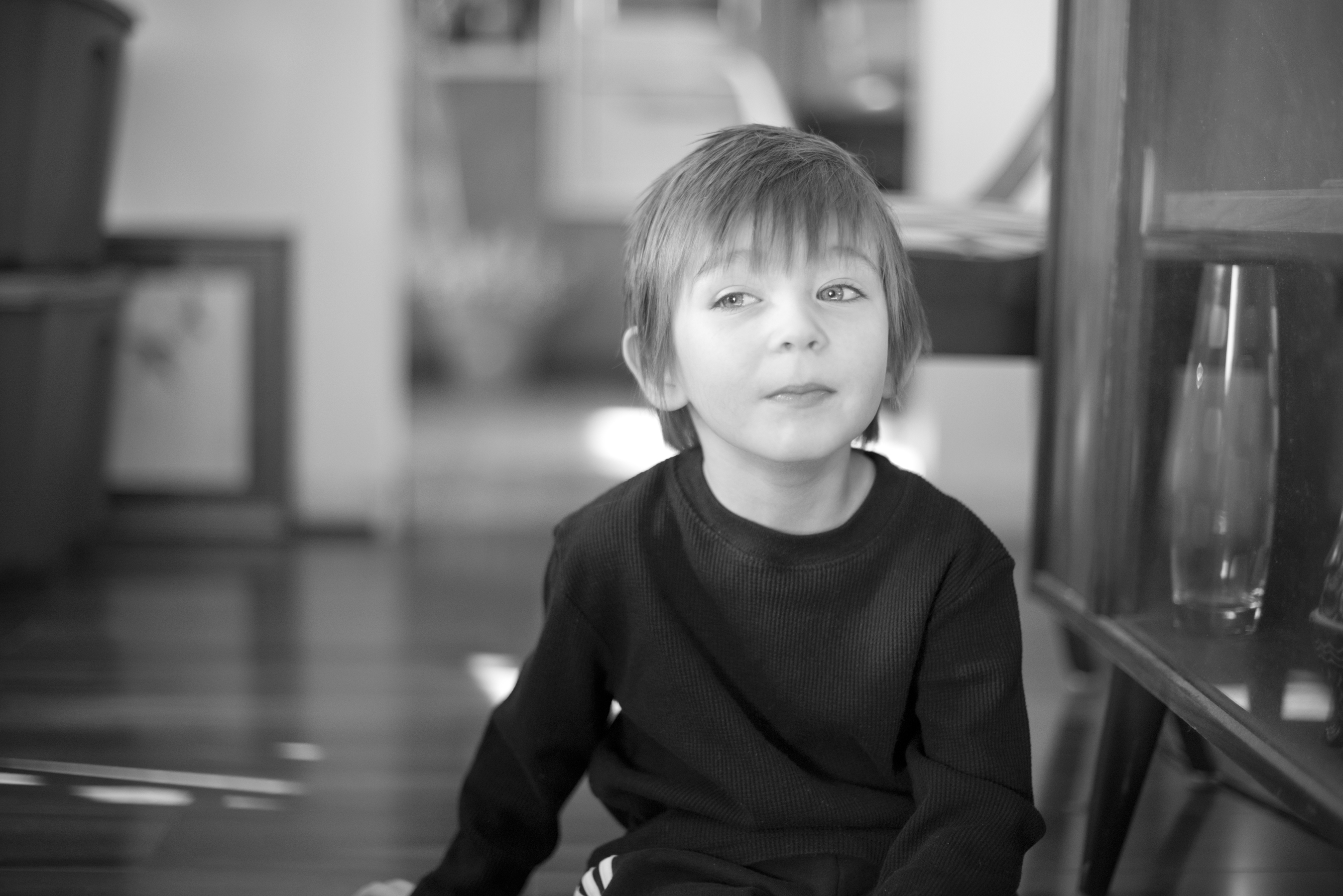 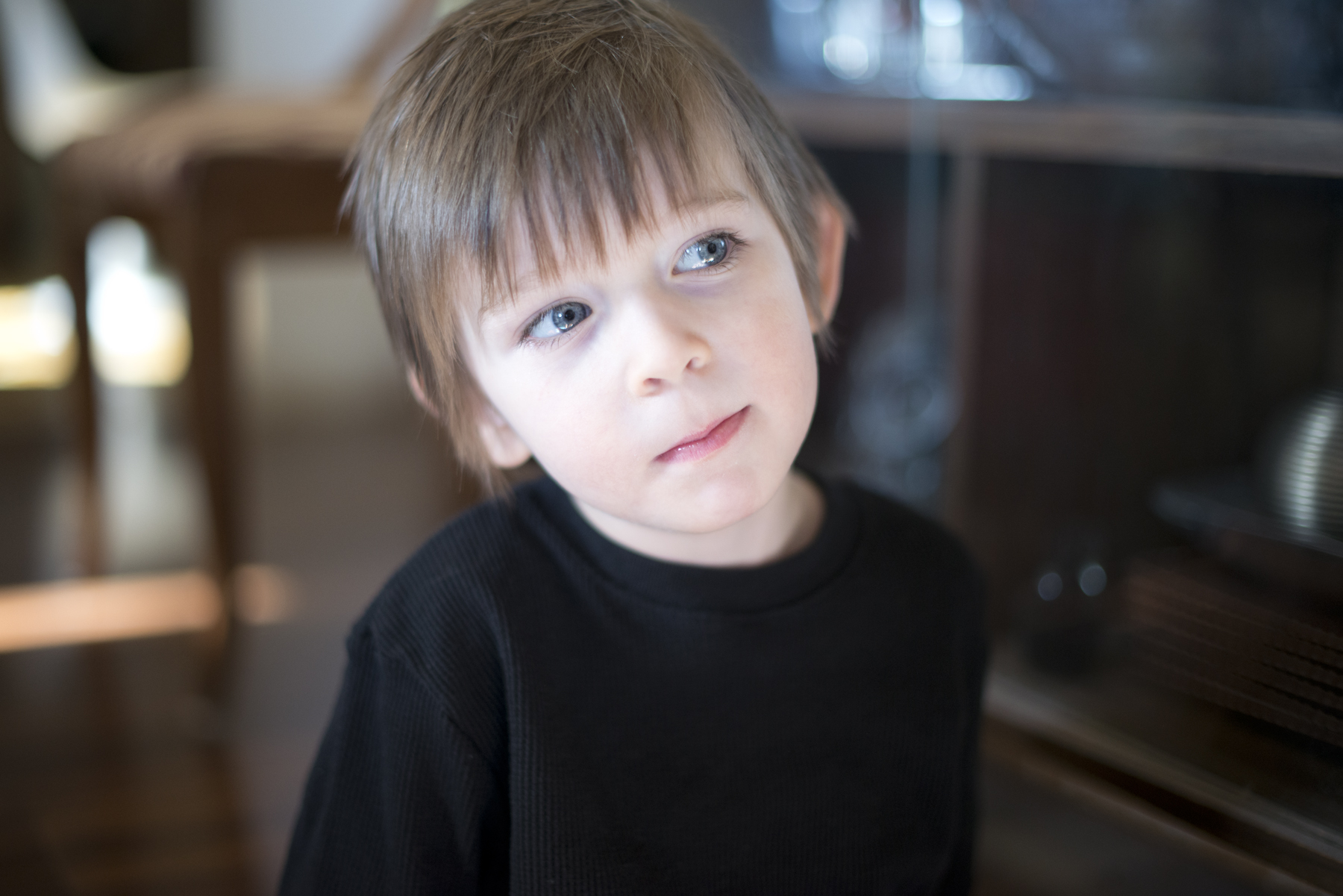