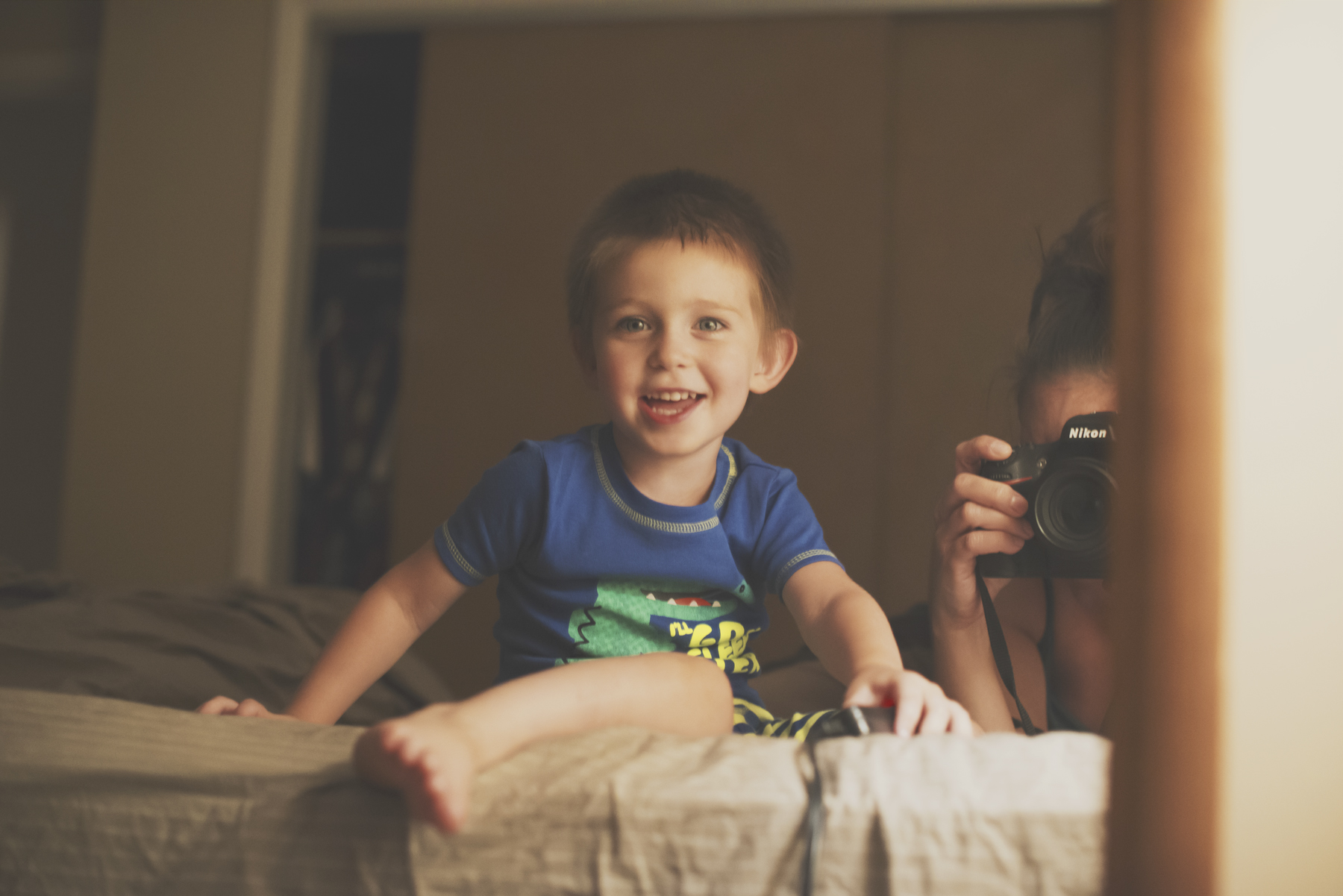 Izzy—Hangin’ out with us in our room before bedtime… discovering the mirror that’s awaiting to be attached to his new dresser.
.
. .

It’s not that he’s never seen the reflection of his self or mine in a mirror before… rather, it’s that usually when it happens, it’s just in passing. But the other night, with his dresser mirror still leaning against the wall in our room until we can get around to attaching it, we had the chance to explore and discover the science behind how mirrors work… how everything we see is a flipped replica of everything it reflects… or backwards, as I put it to him. {I flipped my photo to reveal what the mirror was seeing, not what we saw through it… thus, the right-reading logo on my camera and words on Izzy’s jammies.} Usually we just hang out in our room/bed for story-time, pillow fights, or torturous tickle fests and the ensuing laughter that has proven to be better than any other sound on earth. But this night, it was just a lesson in how mirrors work. I had to grab my camera and capture this expression of wonder and delight before it disappeared for the night along with his sweet little frame into his room and a land of dreams.

Having a king size bed is pretty much the best thing ever when you have kids. It’s no longer just a bed… it’s a playground and laughter zone. Isaac loves to jump on our bed… and I’m not one of those “don’t jump on the bed” kind of moms, so it works out perfectly. It took him a long time to let his feet leave the bed when bouncing on it. Until recently, he was a timid bouncer {which surprised me, given how much of a Tigger fan he is}. So his bounces were always just the safe, knee-bending kind where his feet never got air. But somewhere in the near past, he let go of that fear and his feet took flight. Now, I let him bounce to his heart’s content, as long as he stays toward the center of the bed. I look forward to getting some pictures of him airborne at some point. I’ve always admired photos of kids mid-air while bouncing on their beds. Since his bed is currently a sleeper sofa, it’s not ideal to capture this in his room right now. But when it is, I’m sure I’ll get the obligatory shot.

Our bed is also the reading zone. We’ve had before-bed story-time elsewhere in the house, too. But I always enjoy it most when we’re all cuddled up together in the big bed. It’s like casting away on a little island and leaning up against a palm tree to read our favorite-at-the-moment book.

Of all the photos I have of him on our little island, there’s only been one other where I was in the shot. It was back when I was still pregnant with Anysia…
. 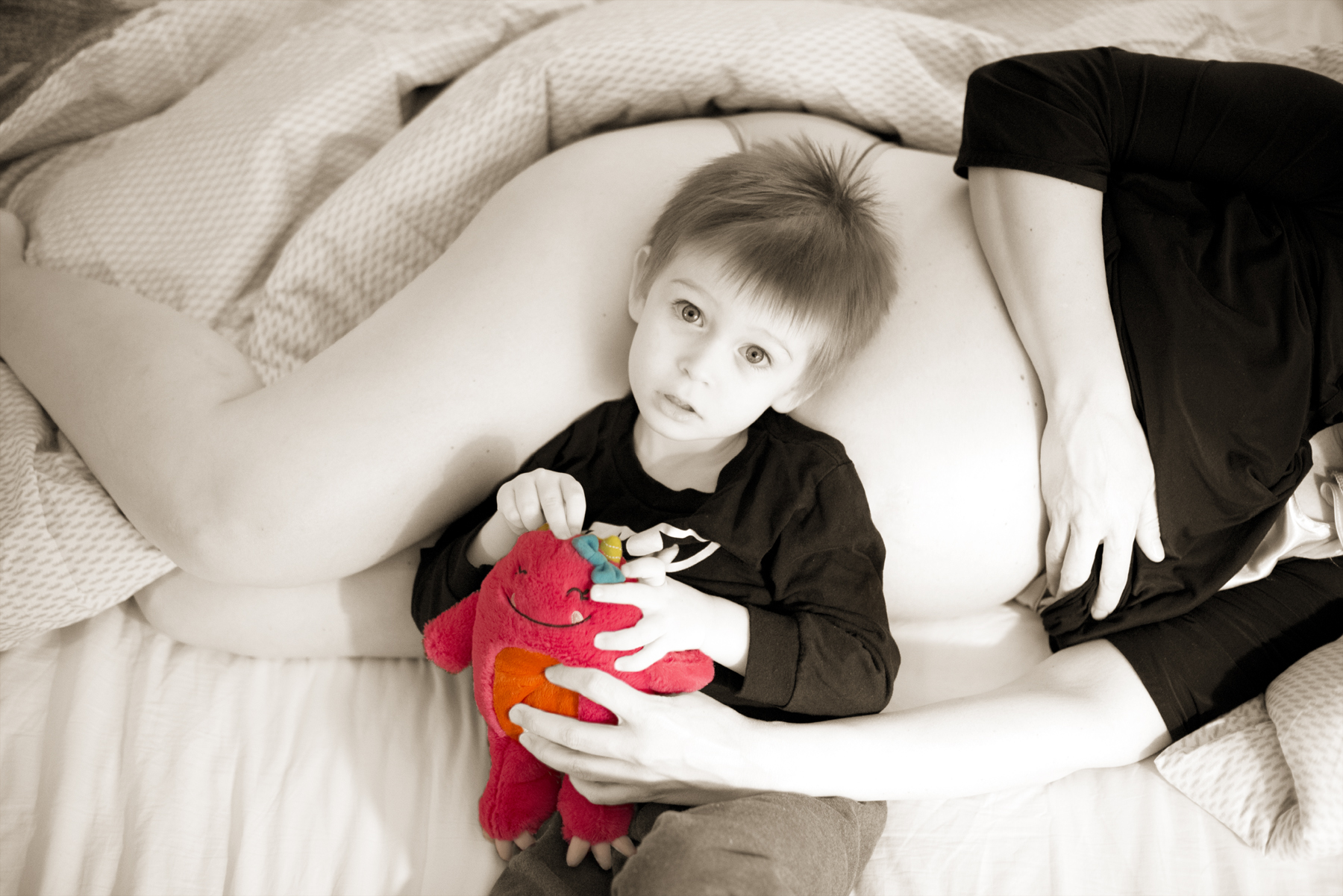 .
It’s one of my most-treasured photos. My sister took it the night before we all went to the hospital to deliver Anysia. I had realized that I hadn’t yet taken any photos of Izzy close to my belly… or rather, close to his sister… where he loved to be. Who can know for sure, but I get the sense that he always wanted to be very close to her during those last few months because he knew he would not have long with her. He always wanted to nuzzle up close to me and her there… which is why I was more than happy to let him sleep in our bed every night all those months. I know I’ve written this somewhere before, but I’ll say it again. Looking back on that time, I realize that it was all meant to be that he wouldn’t sleep in his own bed during that time. He had only recently graduated from his crib into a toddler bed and done well with sleeping/staying in his new bed through the night from that point up until the last few months of my pregnancy. If he woke up in the middle of the night during that stretch, he’d just call for us, at which point we would go in and talk him back to sleep. But almost the entire duration of knowing something was wrong with our daughter while in my belly and that she would likely not live, he chose to get out of bed {instead of calling for us} and join us in our room. He would quietly come in and climb up into bed with us, sometimes without us even realizing it. I’d inevitably wake up eventually, because he always slept closer to me and always had to have at least one limb touching my belly, often with his head nestled in above my belly as well. I truly believe he just needed to be near his sister and that he was aware that this was the best opportunity to do so.

Whether that’s the reality of it or not, the memory of those days when we were all four close together like that is something I hold very close… among the many treasured cuddling, reading and tickling memories I have of this 36 sq. ft. area of our home. I’m grateful for such tender, intimate momets the four of us were able to have together.

Since the theme of this post seems to be Izzy hangin’ out in our room, I’m including some older pics of him playing on our bed… prior to perfecting the lift-off jump, when he was still just in somersault mode.
. 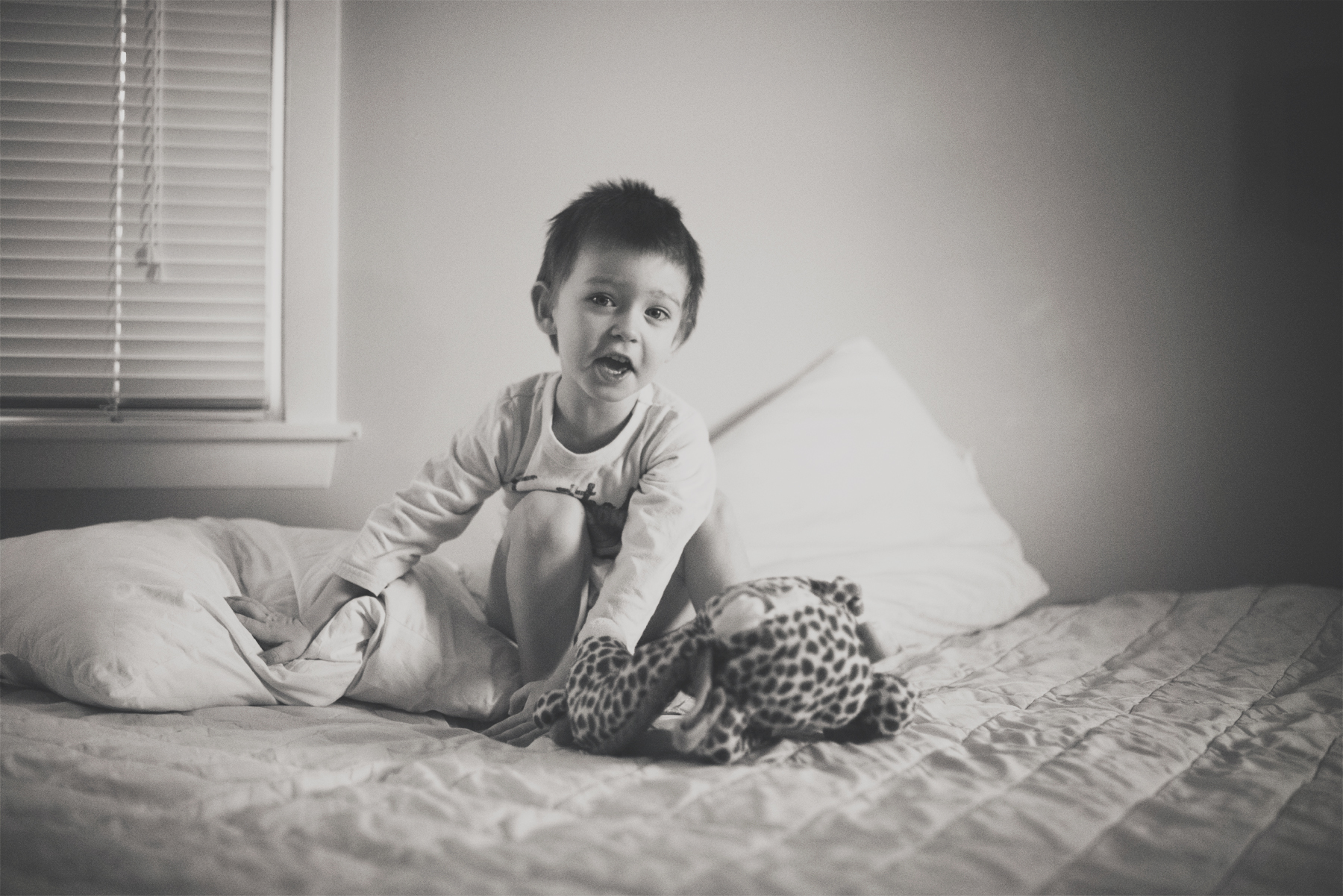 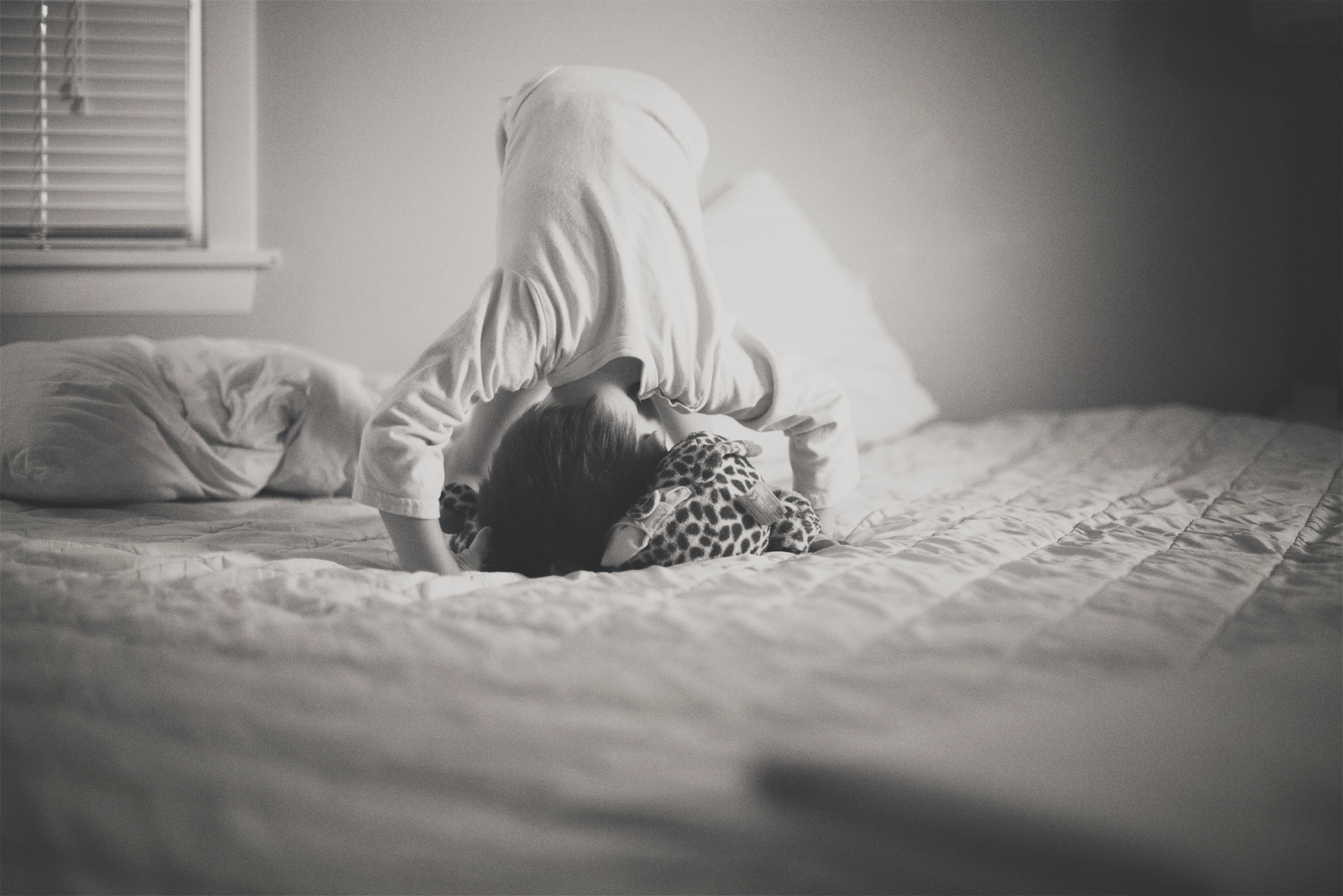 Hard to believe these two shots are almost a year old. Some photos sit unused until just the right time, I guess. I kind of like how that worked out, because it’s fun to see how much he’s changed in one year from what he looked like in these pics to what he looks like in the first one above. “A portrait of my child, once a week, every week, and one from a year earlier”… maybe that can be next year’s Project52. This year, it’s just a one-time deal for this week.

Just one little conversation in keeping with the Izzy-isms I like to include with my Project52 posts. This is one I didn’t get to witness, but was told about after it happened.

During dinner {or just after he’d finished eating} while I was at counseling last night…
Izzy: I love you, Dada.
Mr. B: Is that because you want ice cream for dessert?
Izzy: No. I love you because you give me hugs and kisses.